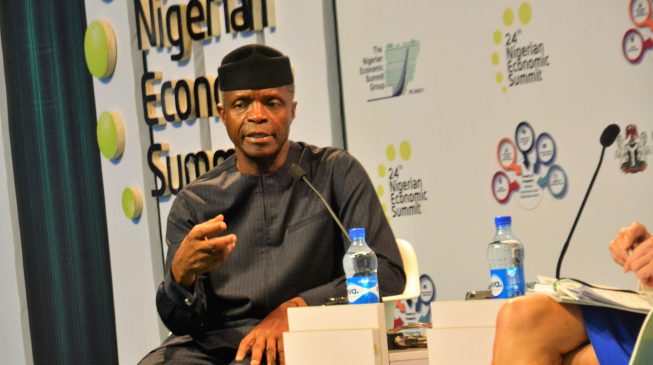 Vice-President Yemi Osinbajo says the federal government has plans to establish an Entrepreneur Bank to provide flexibility in provision of facilities to businesses.

Osinbajo disclosed this while fielding questions from a cross-section of women traders at a programme tagged ‘Next Level Conversation’ on Monday in Abuja.

The women, who were mostly entrepreneurs, were drawn from the education, environment, agriculture, real estate, hospitality, among other sectors.

The vice-president said the issue of giving cheap loans to small businesses had featured prominently in the President Muhammadu Buhari-led administration.

“We have been able to deal to some extent with small and micro businesses; we have TraderMoni, MarketMoni, FarmerMoni; which are basically very small credit schemes,” he said.

“We are also looking at an Enterprise Bank or an Entrepreneur Bank which is one of the types of establishment we are looking at.

“That is why we are talking about Entrepreneur Bank; of course, we will need a bill in the national assembly.

“In the meantime, we think we can start with a bond to put a lot around it without necessarily building another big bureaucracy.”

Osinbajo said there isa need to properly fund education as efforts were being made to get the Tertiary Education Trust Fund (TETFund) to also fund the private sector.

He reiterated that the issue of funding education lied with the federal, state and local governments.

The vice-president said the federal government would collaborate with state and local governments to curb multiple taxation which had adverse effect on businesses.