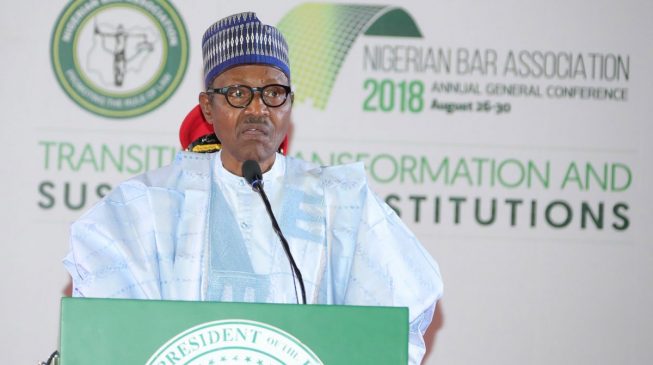 This is coming two weeks after TheCable first reported that a civil society group, Anti-Corruption and Research Based Data Initiative (ARDI), has launched a legal move to remove the CJN.

The president delivered a speech to justify the suspension on Friday at the swearing-in ceremony of Justice Ibrahim Tanko Mohammed acting CJN, saying the order came from the Code of Conduct Tribunal.

Here are highlights of the president’s speech:

Onnoghen admitted to the charges

In his speech, the president expressed worry that Onnoghen admitted to the charges levelled against him.

“Perhaps more worrisome is the Chief Justice of Nigeria’s own written admission to the charges that he indeed failed to follow the spirit and letter of the law in declaring his assets, citing ’’mistake’’ and ’’forgetfulness’’ which are totally unknown to our laws as defences in the circumstances of his case,” he said.

Other suspicious transactions have been discovered

“Although the allegations in the petition are grievous enough in themselves, the security agencies have since then traced other suspicious transactions running into millions of dollars to the CJN’s personal accounts, all undeclared or improperly declared as required by law.”

Buhari said Onnoghen should have removed “himself from superintending over” the judicial arm while the trial lasted but instead, “the nation has been treated to the sordid spectacle of a judicial game of wits in which the Chief Justice of Nigeria and his legal team have made nonsense of the efforts of the Code of Conduct Tribunal to hear the allegation on merit and conclude the trial as quickly as possible”

The Supreme Court has been releasing people accused of corruption

Buhari said: “It is no secret that this government is dissatisfied with the alarming rate in which the Supreme Court of Nigeria under the oversight of Justice Walter Onnoghen has serially set free, persons accused of the most dire acts of corruption, often on mere technicalities, and after quite a number of them have been convicted by the trial and appellate courts.”

He influenced the court

“Whether deliberately or inadvertently, we have all seen the full weight of the Chief Justice of Nigeria descend on the tender head of one of the organs of justice under his control. There is simply no way the officers of that court, from the Chairman to the bailiffs, can pretend to be unaffected by the influence of the leader of the Judiciary.”