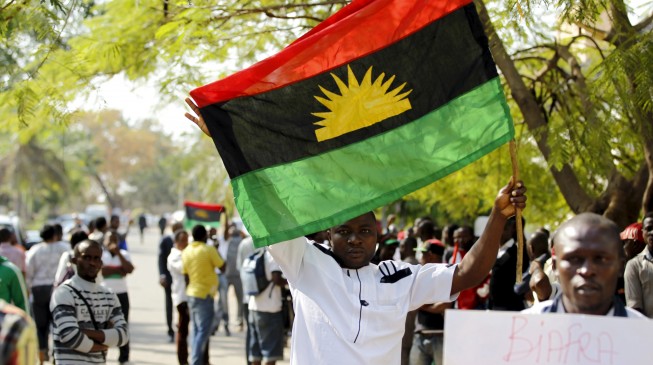 The Indigenous People of Biafra (IPOB) says it will conduct a referendum for a sovereign state of Biafra on February 16.

Emma Powerful, IPOB spokesman, made the announcement in a statement issued on Monday.

The presidential and national assembly elections are scheduled to hold on the same date.

Powerful said Nnamdi Kanu, IPOB leader, is currently in London where he will be discussing the referendum with members of the group.

“We the global family of the Indigenous People of Biafra (IPOB) ably led by Mazi Nnamdi Kanu wish to announce officially to the people of Biafra both home and in the diaspora, friends of Biafra and lovers of freedom that our supreme leader Mazi Nnamdi Kanu is currently in London to join his family and see a new born child he hadn’t seen because of his illegal incarceration and detention since 2015,” the statement read.

“He will also discuss with IPOB top family members in London to finalize the way foward for Biafra referendum that will hold on February 16, 2019 along with the Nigeria presidential poll.”

He said Kanu’s relocation to the UK from Israel is “actually to perfect arrangements” on the referendum in a bid “to ascertain number of those who want Nigeria politics and those who want Biafra freedom through a peaceful and democratic process for the sovereignty of our dear nation Biafra”.

“Our leader Mazi Nnamdi Kanu is currently meeting with IPOB high command in Europe to perfect plans for the referendum which will go side by side with the February 16 presidential poll,” he added.

The secessionist group had asked the Igbo to boycott any election in the south-east until the federal government agrees to hold a referendum on Biafra.