IT’S OFFICIAL: FG to arraign Onnoghen before CCT on Monday 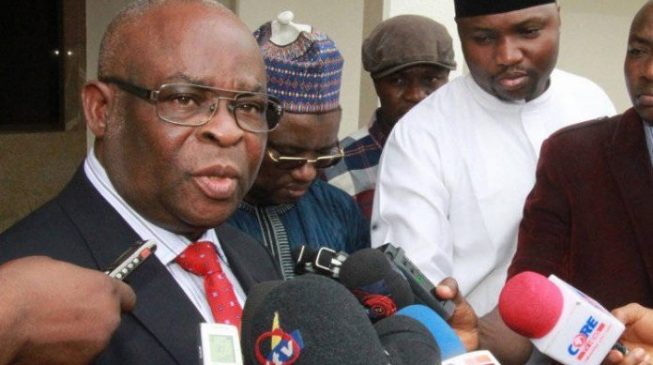 Walter Onnoghen, chief justice of Nigeria (CJN), will be arraigned before the Code of Conduct Tribunal (CCT) on Monday over alleged non-declaration of assets.

Ibraheem Al-Hassan, head of press and public relations unit of the tribunal, disclosed this in a statement issued on Saturday.

Al-Hassan said the arraignment followed an application filed by the Code of Conduct Bureau (CCB) to the CCT chairman on Friday.

He said a six-count charge had been filed against the CJN.

“However, service of sumoms has been effected to the defendant, the three man panel led by Justice Danladi Y. Umar, will commence the trial on Monday, 14th January, 2019 at its courtroom, situated at the headquarter, along Jabi Daki biyu, Saloman Lar way, Abuja, at about 10:00am,” the statement read.

“The application was filed yesterday by the operatives of CCB, dated 11st January, 2019 and signed by Musa Ibrahim Usman (Esq) and Fatima Danjuma Ali (Esq), containing 6 count charges all bothers on non declaration of asset.”

TheCable had earlier reported that there were moves to remove Onnoghen before the elections.

A civil society group, Anti-Corruption and Research Based Data Initiative (ARDI), had petitioned the Code of Conduct Bureau (CCB), listing a number of allegations against Onnoghen.

He was accused of maintaining domiciliary foreign currencies account said to be contrary to relevant laws, especially for public office holders.

The group said its petition, dated January 7, 2019, became necessary “bearing in mind the imminence of the 2019 General Elections and the overwhelming roles of the Judicial Arm both before and after”.

The petition was stamped “received” by the office of the CCB chairman on January 9, 2019.

The CCB is empowered by the constitution to investigate public officers, after which it would forward its findings to the appropriate body for trial if the allegations are confirmed.

Onnoghen is not the first prominent personality to be arraigned at the tribunal for non-declaration of assets.

In 2015, a 13-count charge was filed against Senate President Bukola Saraki but he was discharged and acquitted two years later.

The supreme court under the leadership of Onnoghen had ruled that there was no evidence to convict the nation’s number three citizen.

No chief justice of Nigeria has ever been subjected to trial, although the President Muhammadu Buhari administration has charged judges to court over allegations of graft and money laundering.

An early morning raid was conducted by the secret police on the residences of some judges in 2016 and substantial amounts of money in local and foreign currencies were recovered.