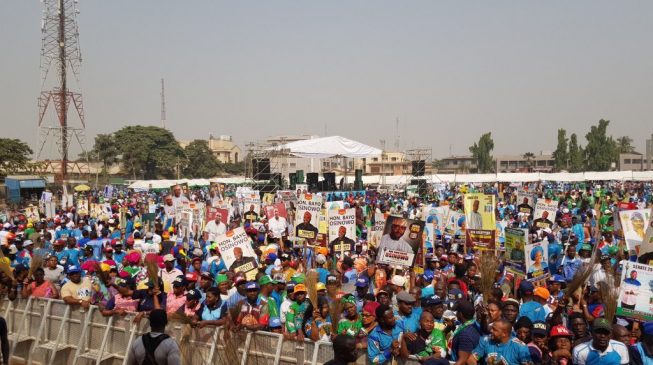 Violence erupted on Tuesday as suspected political thugs disrupted the governorship campaign rally of the All Progressives Congress (APC) in Lagos.

Several people were injured in the violence, including three journalists who sustained bullet wounds.

The hoodlums, said to be members of the National Union Road Transport Workers (NURTW), invaded the Skypower Ground Ikeja venue of the campaign with guns, daggers and other dangerous weapons.

Musiliu Akinsanya, a strong member of the party and NURTW leader popularly known as MC Oluomo, was reportedly stabbed by rival factions of the party.

He is currently on admission in a hospital.

The violence broke out mid-way into the programme, cutting short the event as the hoodlums were said to have shot sporadically in different directions, engaging each other in a fight.

Members of the party scampered for safety to avoid being hit by bullets being fired indiscriminately by the hoodlums, while security operatives tried to control the situation.

Akinwunmi Ambode, governor of Lagos; Idiat Adebule, his deputy; Babajide Sanwoolu, the APC governorship candidate in the state, and other prominent members of the party were escorted out of the venue.