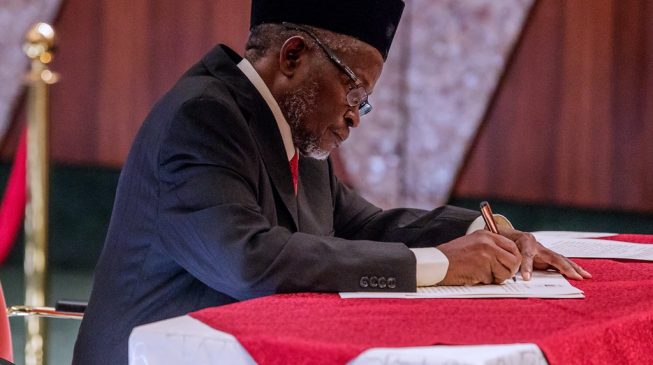 Muhammad, who was sworn into office on Friday, said this while swearing in members of the election tribunal.

He asked judges to stand to protect and uphold the integrity of the judiciary.

“The judiciary is in trying times, you must stand to protect and uphold the integrity of this arm of government,” he said.

“I encourage you to uphold and enhance the honour and standing of the judiciary and I pray that the Almighty God will bestow upon you strength, good health and wisdom in the performance of your duties… I congratulate you on this appointment and I urge you to see this assignment as a call to greater service to your nation.”

That was his first official function since he took over from Walter Onnoghen who was removed over charges on false assets declaration.

Sidi Bage was one of the 15 justices of the supreme court who attended the ceremony along with the acting CJN.

It is unclear why other supreme court justices were absent at the event.

The appointment of Muhammad has sparked controversy within and outside the country. Many lawyers and human rights activists have accused President Muhammadu Buhari of not following due process.

The US, UK and EU have expressed concerns that the action of the president might affect the credibility of the elections.