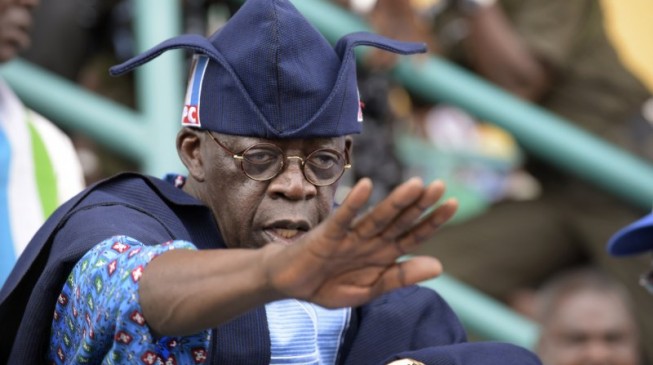 Bola Tinubu, a national leader of the All Progressives Congress (APC), has asked former President Olusegun Obasanjo to keep quiet and retire to his farm in Ota, Ogun state.

Tinubu said this at the presidential rally which held in Maiduguri, the Borno state capital,on Monday.

Speaking to a crowd of supporters that thronged Ramat Square, the location of the rally, Tinubu described Obasanjo as an “expired leader” that is not to be trusted.

He was reacting to a recent comment by the former president that the Buhari-led administration was planning to rig the general election.

“You can hear the other expired leaders like Obasanjo, ranting and lying. Don’t believe him, don’t trust him. He is expired,” he said.

“With the sign of senility experienced by our dear brother, Uncle Obasanjo, I think Ota should be enough a retirement place to keep quiet.”

This is not the first time the former Lagos state governor would hit Obasanjo for attacking Buhari.

Early in 2018, when Obasanjo wrote a letter advising Buhari not to contest for reelection, Tinubu had described the letter as “bad belle”, an informal, Nigerian slang that suggests one hates or has bad wishes for another person.

“I remember my grandmother used to send me to a letter writer in the post office of those days, so somebody is writing letters these days, a letter of politics, as if they’ve never been there before. Bad belle letters,” he had said.