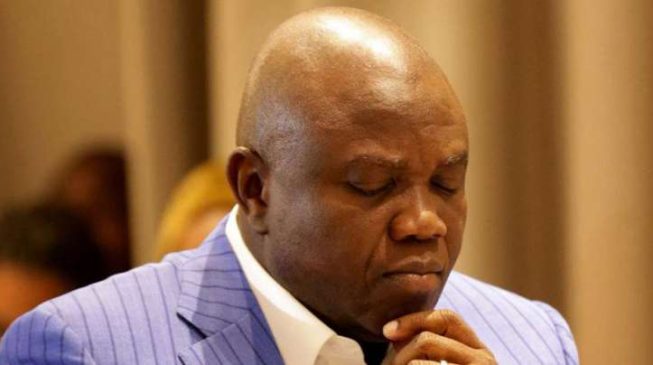 Lawmakers in the Lagos state house of assembly have accused Akinwunmi Ambode, governor of the state, of incurring expenditure from the 2019 budget without presenting it to the assembly.

At plenary on Monday, the aggrieved lawmakers gave the governor a week ultimatum to explain his action, saying failure to do so could trigger impeachment proceedings.

Majority of the lawmakers at the plenary called for the impeachment of the governor while a few asked him to resign.

But Mudashiru Obasa, the speaker, appealed to his colleagues to give the governor the last chance to defend himself.

Nonetheless, he asked those pushing for the governor’s impeachment to start collecting signatures.

On several occasions, the governor met brick wall in his attempt to present his last budget.

On January 3, Olusegun Banjo, Lagos state commissioner for budget and economic planning, had said the state’s 2019 budget of N852.317 billion had been submitted to the state assembly.

It was the first time in 10 years that the state would present the budget after the fiscal year ended.

The commissioner explained that the governor had sent verbal information to present the budget on December 24, after the state executive council approval on December 19.

But the presentation did not take place as the house was on recess and could not form a quorum.

On January 21, the lawmakers frustrated thebid of the governor to present the budget.

Ambode had contacted the lawmakers that he was set to present the budget but he was not given the opportunity.

A legislative source told TheCable that the assembly will write to Ambode, detailing his “breach of the constitution.

The source said the response of the governor will determine further actions. He said one of the options that would be presented before Ambode is resignation and that no impeachment proceedings yet but that the atmosphere is tense.

Ambode’s relationship with the lawmakers went cold after he fell out with the leadership of the All Progressives Congress (APC) in the state.

There had been reports of attempts to impeach the governor but in an interview shortly after Ambode lost his reelection ticket to Babajide Sanwo-Olu, Obasa had said the governor’s action will determine whether or not he would be impeached.