Lagos assembly: Why Ambode is at risk of impeachment 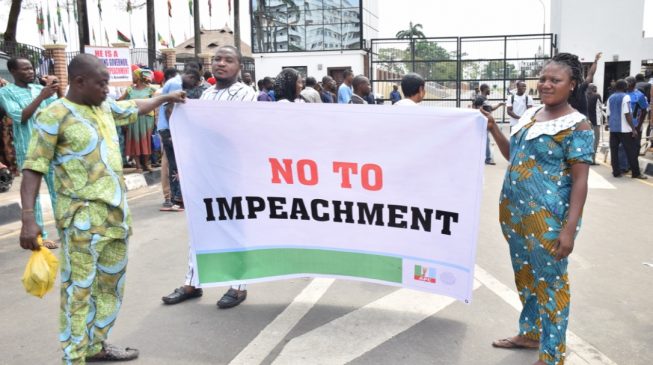 The Lagos house of assembly has explained why Akinwunmi Ambode, governor of the state, risks being impeached.

The house had on Monday threatened to commence impeachment proceedings against the governor over alleged infractions in the 2018 budget and the yet-to-be-laid 2019 appropriation bill.

The house had summoned the governor and relevant commissioners to appear before it in seven days to explain themselves.

Speaking on the matter during a press conference on Wednesday, Sanai Agunbiade, majority leader, said the house is not witch-hunting Ambode, but wants due process on the appropriation bill.

Agunbiade said the house would apply the maximum sanction on the governor if he failed to utilise the window of one week given to him to appear.

The majority leader said it is illegal for the governor to start spending budget estimates without the appropriation bill being first laid before the house.

He said: “We are responding to various groups that have come today to appeal to the house in respect of what they heard and the seeming impasse between the executive and the house.

“We decided to correct the misconceptions and wrong information that have been fed the public.

“We wish to state clearly that today, about five groups paid visit to Lagos assembly to plead with the house not to impeach the governor.

“The issue before us is not whether or not we want governor Ambode to end his tenure. He is still the governor of Lagos state and we take him as the governor.

“We want the public to know that the major issue in contention is the 2019 appropriation bill, which by now we feel should have been before the house.

“We now discovered that expenditures are being incurred and warrants have been issued in respect of the budget that has not been laid before the house.

“This we found inappropriate, and before this also, we have found some infractions in the 2018 budget, where we discovered that some expenditures were made outside the budget without the approval of the house.

“It is now left for the governor to shut the window at us and tell us he is not interested or take advantage of the window we have given. Of course we are expecting that he will walk in and we look at the issues.

“Of course, the constitution is so clear about what is to be done where there are infractions, that is why the issue of impeachment came in.

“Where these infractions continue with impunity and nothing is done and the opportunity given to make clearance on these, we will apply the necessary provisions of the constitution, which is impeachment.

“If the public is saying the house should not impeach the governor, the public should also tell the governor to do the needful in respect of the budget.”