Lai: Those criticising Buhari over Onnoghen are hypocrites 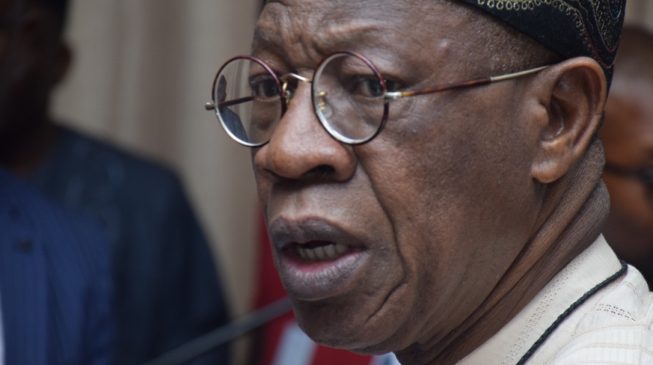 Lai Mohammed, minister of information, says those criticising President Muhammadu Buhari over the suspension of Walter Onnoghen as chief justice of Nigeria (CJN) are “hypocritical and insincere”.

There has been an outrage over the action of the president, with the US, UK and EU, faulting the timing.

The leadership of the national assembly, notable lawyers and human rights activists have condemned Onnoghen’s suspension.

But speaking with journalists in Kwara state on Saturday, Mohammed defended the action of the president, taunting the Peoples Democratic Party (PDP) for suspending its presidential campaign in protest.

Mohammed wondered if there was a relationship between Onnoghen and the PDP that Nigerians are not aware of.

“Which Campaign? Their campaign was over a long time ago. There is nothing to suspend. We said it that their campaign had floundered,” he said.

“For anybody who read Mr. President’s address yesterday, two things stood out. The first is that additional evidence has just been revealed that the suspended CJN refused to declare millions of dollars in his possession.

“More worrisome is the fact that when the suspended CJN was confronted with the petition that he failed to declare his assets, he added that it was a mistake, that he forgot.

“Now, I would have been a happier person if the same people who are now crying tyranny and dictatorship could really address the issue raised by the President, in his address on Friday, that addition investigations have revealed that several millions of dollars were found in the CJN’s account.

“And when the CJN was confronted with the original allegation, he admitted that he forgot to make full declaration, and that it was a mistake.”

The minister added that the president merely carried out an order of a court of competent jurisdiction directing him to suspend the chief justice pending the final determination of the case against him.