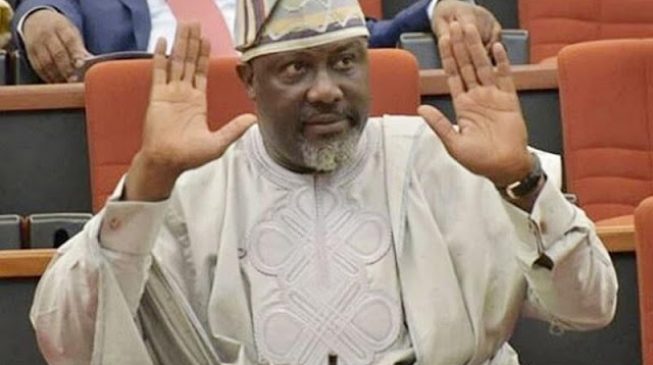 Dino Melaye, lawmaker representing Kogi west senatorial district, has surrendered to the police after a week siege at his Abuja residence.

At least 30 policemen had invaded his residence on December 28, vowing not to leave without arresting him. He was accused of culpable homicide, an allegation he denied.

TheCable understands that Melaye is currently police custody in the company of some lawmakers and his lawyers.

Melaye came out of hiding one day after Femi Falana, human rights lawyer, advised him to surrender.

He had failed in his bid to secure a court order to make the police vacate his residence.

Accusing the Kogi state government of being behind his ordeal, Melaye had vowed not to succumb to intimidation.

“There is a deliberate attempt by the Kogi state government to kill me, to destroy me. I have written the inspector-general of police (IGP). My international passport is with the Nigerian police, I have a court order that it should be released to me but the IG has refused to honour the court order,” he had told journalists on the day of the police invasion.

“If the police that is supposed to maintain law and order cannot obey court order, how do they expect citizens to obey court orders? As I speak to you, my security detail has been withdrawn since April and it is all in a deliberate attempt to expose me, so that I will be killed and destroyed.

“The same SARS from Kogi that shot at me are the same SARS in the photograph occupying my compound and 80 percent in mufti. I thought that recently that there was an instruction that SARS should wear uniform… I am in seven different courts and anyone that they will do will be number eight. I’m not afraid to be arraigned because my hands are clean and I know the God I serve will deliver me.”