Minimum wage: NLC set for nationwide protest as meeting with FG is adjourned 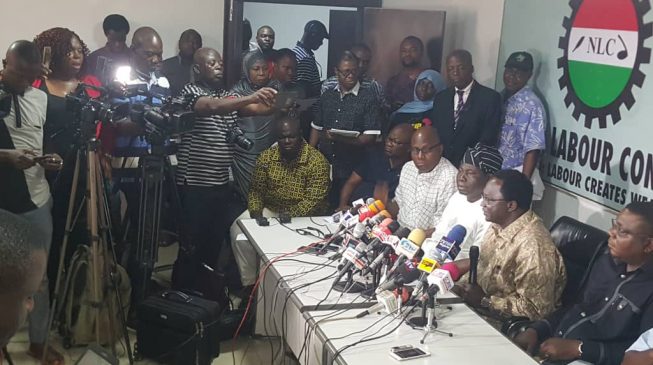 Organised labour will proceed on its planned nationwide protest on Tuesday to press home its demand for the new N30,000 minimum wage.

Ayuba Wabba, president of the Nigeria Labour Congress (NLC), made this known after a meeting with the federal government’s officials on Monday.

“We will surely go ahead with the mass protest nationwide on Tuesday,” he said.

“The protest is about implementation, it has no link with the transmission. We are trying to see how the bill will be transmitted to the national assembly.

“The protest is about how to get all parties committed to the issue of minimum wage, it is different from how we get this bill transmitted with timeline to the national assembly.”

Chris Ngige, minister of labour and employment, said the meeting with organised labour will reconvene on Wednesday.

The minister said a definite date on when the minimum wage bill will be transmitted to the national assembly will be known during the meeting.

“It has been difficult to arrive at a date because there are processes to follow on the bill,” he said.

“We have to go to the federal executive council with a council memo on the bill after that, we will go to the national economic council and the council of state.

“But for the council of state, the president has to look at his own timetable and we will inform past heads of state and justice of the federation. This can take two weeks.

“However, we are trying to see if we can accommodate all these meetings by next week because we cannot do Council of State meeting again this week.

“Immediately after that meeting, we will transmit the bill.”