Nigeria’s politics of thugery and two-facedness 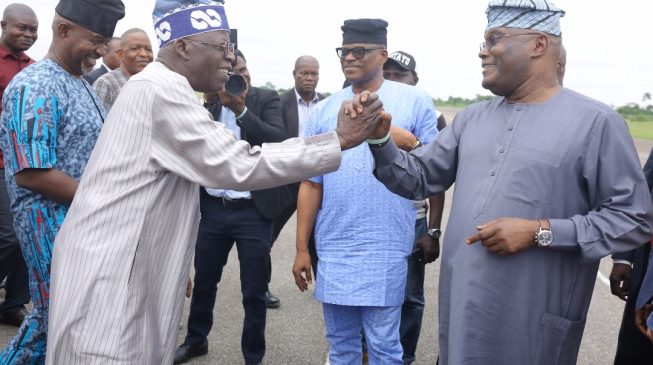 There is no political party (either dead or alive) in Nigeria that does not make use of thugs to either get to power or remain in power and it did not start in 1999! Those who understand where we are coming from can identify with the dirty-issue I am raising here. As long as the politics of thugery continues to breathe in our polity, we would never be able to have a decent and progressive country.
Gangsters and brutes were used by the Administration that passed the baton of leadership to the current Administration. Back then, a thug was able to build a Higher Institution and other ruffians were able to access the kind of money and power that professors can never touch till they pass on in Nigeria. This is one of the major reasons our educated minds are leaving our varied places of learning, because it is obvious that we do not value knowledge in Nigeria. Also, our nation has been structured in way that makes it almost impossible for law-abiding citizens to blossom as thugs are thriving.
Last year, a fellow-citizen told me that a gangster—who was declared wanted is still being protected. And a few days ago, I heard that a political-thug, being heavily protected—was attacked in Lagos at a political meeting, but prior to that time, same ruffian was declared wanted—as an effect of some killings that took place in the State some months ago. And since he was rushed to the hospital, I am told Governors have been going there to check in on him. This is the kind of society that our political leaders are deliberately building.
Take for instance, in Lagos, when a Governor takes over power, he comes up with laws, bringing about order in the State, but when the gubernatorial election is around the corner, those laws would be deliberately suspended, because he’d need thugs and gangsters to retain power. It is the same problem from Kano to Kaduna, from Sokoto to Osun, from Kogi to Oyo and from Ekiti to Yobe. At this moment in Lagos, there is no semblance of governance! “Okadas” are back everywhere and Lagos has now probably become the dirtiest State on earth!
The reason intelligent and creative minds are deliberately not coming into the realm of politics in Nigeria is because they are afraid of being killed by thugs as those who were murdered ahead of them and till today, those who killed them are still unknown and nameless. Nigeria is still a jungle and times of elections always reveal to the whole world—our not being ready to build a nation that works.
When someone—who consistently says he is a man of integrity and equally says he has come to fight corruption, talks, condemning sixteen (16) years of the PDP’s misrule, now romances those who were in the forefront during those sixteen (16) years, it sends the wrong signals to those who have not lost their minds to politics. When same man dances and sings to welcome corrupt people who are influential—from the political party he daily condemns, he is by the same token sending the wrong signals to our children and I doubt if the history will be kind to him. The question on the lips of every right thinking Nigerian for PMB is: how can you be fighting corruption and still be working with corrupt people? Love for power makes politicians do ridiculous and unthinkable things!
Taking this national-issue a little further, it is important to let you know that definitions definitely do change during elections. Good does become bad and corrupt folks automatically do become clean folks. Also, thugs do become men of high-value. Why? It is because politics is a game of number. In Nigeria of today, no man of integrity will either get to power or retain power without working with corrupt people! If there is anything PMB has achieved since he became the President of the Federal Republic of Nigeria, he has succeeded in redefining integrity. Integrity has lost its true meaning under his watch!
Each time politicians speak, I want to first of all know why they speak and where they are when they speak. There is no truth in the mouth of professional politicians! They speak to deceive—the unwary and gullible citizens of Nigeria. When they wanted to send GEJ back to his village, OBJ and Atiku were great men, who loved Nigeria, but now that they are working together to send PMB (Tinubu’s client) back to Daura, they have become bad men—who do not love Nigeria. Politics, as it is being played today is about varied selfish interests, not about the poor man, who day by day walks the dusty-streets of Nigeria. The most mind-boggling thing is that countless number of our citizens; are daily running with their lies.
Some hours ago, some Yoruba kings went to identify with Tinubu, being the one who is leading the move to keep PMB in Aso-Rock for four (4) more years. While they were with him in the FCT, BAT said and I quote verbatim about Alhaji Atiku Abubakar: “Atiku was vice-president of this country when the local government allocation for Lagos-State was seized. When we led a protest to Atiku then, he said go away. Go and comply…They (OBJ and Atiku) were taking away 250million from our allocation every month for being innovative and creative. Everywhere we turn; they rejected us and punished us. But we never gave up.” But some years back, Tinubu did not tell us all he is saying now—when he needed OBJ and Atiku to defeat GEJ. This is the duplicitous politics they are playing in Nigeria. It is the kind of politics that is devoid of values. On the condition that OBJ decides to move to their camp at present, Tinubu would change what he says about him and roll our drums to celebrate him.
TheCable