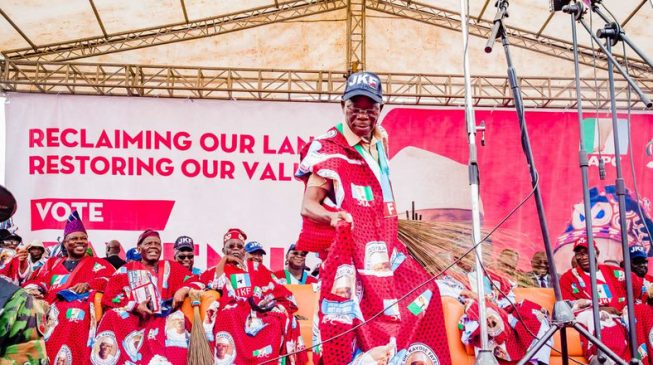 The former Edo governor said Obasanjo had his sight set on winning the Nobel peace prize, hence the decision to “hand over” the former part of Nigeria to its West African neighbour.

Oshiomhole said history will punish the former president for his action.

He made the remark on Wednesday while speaking at the APC presidential campaign rally in Calabar, Cross River.

Addressing the crowd, he said, “never forget Obasanjo because he handed over Nigeria to Cameroon because he wanted to win the Nobel peace prize.

“Nigeria can never forgive him. History will punish him if we are too weak to punish him.

“He separated fathers from mothers, brothers from sisters. The Nobel Peace Prize is not given to traitors”.

Ahead of the general election, Oshiomhole, a former president of Nigeria Labour Congress (NLC), has been increasingly critical of Obasanjo.

In December 2018, he said the former president is at risk of God’s punishment for supporting the presidential ambition of Atiku Abubakar, candidate of the Peoples Democratic Party (PDP).

Oshiomhole had said God “will go to work in February and he will punish him thoroughly and the person he is supporting”.

Commenting on his decision to support Atiku’s bid for the presidency, Obasanjo recently said although he is not perfect, he is “two times better” than President Muhammadu Buhari, candidate of the APC.