Oshiomhole: Onnoghen is not a trader, why is he maintaining accounts with British pounds? 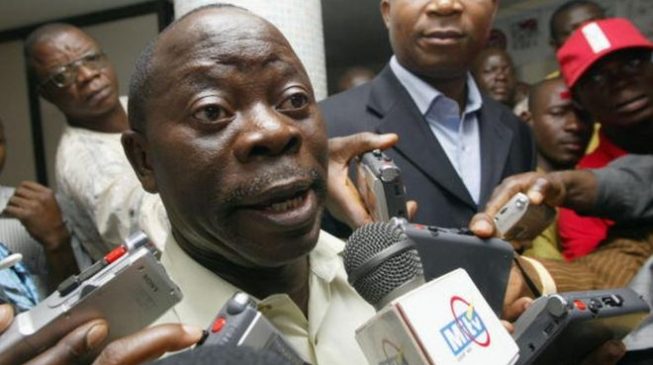 Adams Oshiomhole, national chairman of the All Progressives Congress (APC), has  taunted Walter Onnoghen, chief justice of Nigeria (CJN), over the accounts with foreign currencies reportedly traced to him.

Speaking with journalists after Buhari held a meeting with senators of the All Progressives Congress (APC) at the presidential villa, Abuja, Oshiomhole said defended the president’s action.

Oshiomhole said rather than criticise Buhari over the action, people ought to ask if suspended CJN is guilty of the allegations made against him.

“If he has such memory failure about the size of his number of accounts as to fail to declare them, you and I know that not even ignorance is an excuse in law. So, where are we being hypocritical?

“And at a certain level of responsibility, it’s not even about legal technicalities. It’s about the moral weight, the moral burden you carry. So, nobody should make us feel as though we are at the mercy of any other country.

“The future of Nigeria is in the hands of Nigerians and our laws clear. Our laws are meant to be obeyed.

“Some people say even if it is true, is this the proper timing? What is the best timing to prosecute a crime? Should we suspend criminal justice pending elections?”

In separate statements, the US and UK had expressed concern over the timing of the suspension of Onnoghen, saying the action could have effect on the credibility of the elections.

But Oshiomhole reacted saying: “interference is not acceptable because Nigeria is no longer a colony”.

He said the western world cannot refer to Nigeria as fantastically corrupt on one hand, and on the other, choose to interfere when the country take steps to deal with corrupt individuals.

“The thing is that Nigeria is not a colony. I think we all have to be careful. We must defend the sovereignty of our country,” Oshiomhole said.

“We welcome collaboration, we welcome peer review, we can compare notes, we welcome people who are interested in sharing experiences with us whenever the need arises, whether it’s capacity building, making useful suggestions on how we can continue to improve on our electoral process.

“Those are very valuable contributions that we appreciate. But Nigeria is not a colony. We will not accept any foreign interference in the internal affairs of Nigeria.

“Judges have been dismissed in the United States when they are found guilty of corruption, the Western world cannot on the one hand, when it suits them, describe Nigeria as fantastically corrupt and when a corrupt judicial officer is being charged, people want to interfere.”