Sagay: Obasanjo is president-general of Nigeria for life… in his mind 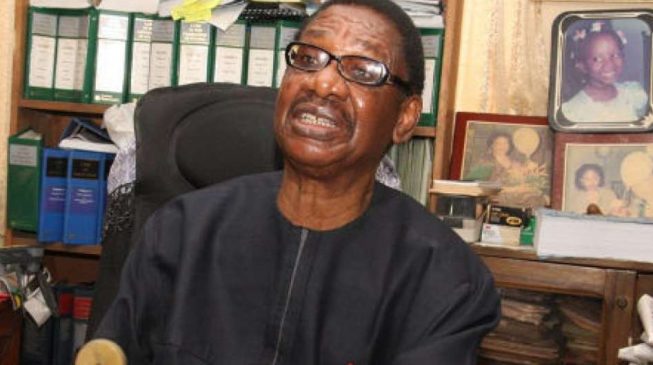 The constitutional lawyer said Obasanjo does not portray himself as a former president of the country.

In reaction to Obasanjo’s latest criticism of President Muhammadu Buhari, Sagay said: “We have had a number of former heads of state, namely Gowon, Shagari, Babangida, Abubakar Salami and Jonathan. All of these have exercised discretion, restraint and self-discipline in relation to their successors, but not Obasanjo.”

He said Obasanjo sees himself as the president-general of Nigeria for life, hence his “meddlesome” streak.

“It strikes me as a case of one who has never recovered from the loss of power,” Sagay said in a statement released on Tuesday.

“By his meddlesomeness, rude and uncouth attitude towards later heads of state, it is clear that he is addicted to a substance called ‘power’, and is angry and resentful towards any other person exercising it.

“The truth is that Obasanjo has never recovered from his power addiction and in his own mind, he is the President-General of Nigeria for life.

“Obasanjo believes that he can break all rules and ethics but it is a crime for others to even appear to follow his footsteps in that regard.

“He is a man who is not conscious of a sense of wrongdoing and is probably unaware of the long list of depredations trailing his footsteps.

“The man is not just immoral, he is worse; he is amoral, i.e., he lacks a sense of right or wrong. Obasanjo is now an old man. It is now imperative that he learns to exercise some discretion and restraint in his public statements.

“His bombastic, false, misleading and destructive outbursts, are not befitting of a so-called Elder Stateman, even more less of a former president.”