Sanwo-Olu, Agbaje absent as guber candidates speak on their plans at BBC debate 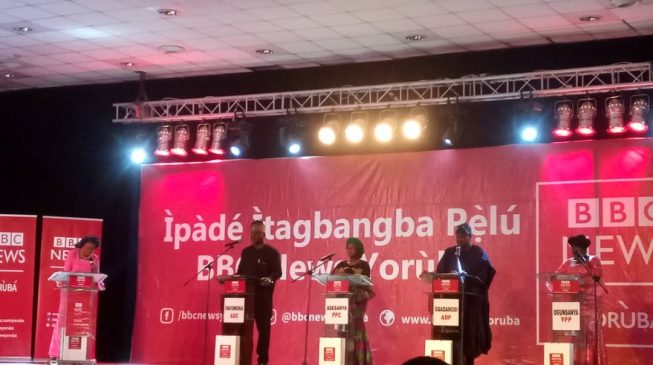 Babajide Sanwo-Olu, candidate of the All Progressives Congress (APC) in Lagos state, and Jimi Agbaje, his Peoples Democratic Party (PDP) counterpart, were absent at a debate organised by BBC Yoruba on Saturday.

But their absence did not affect the event as those in attendance spoke on their plans for the state. They proffered different solutions to the traffic jam, air pollution, waste management and health challenges confronting the state if elected.

Fafowora said as a politician who is closer to the grassroots, he wants to be the governor of the state to tackle the challenges of the common man.

Adesanya, however, said she intends to be the governor to alleviate the suffering of residents in the state.

“The reason why I want to become governor is because I have courage; I say things the way they are and I will spend the state’s resources judiciously,” she said.

“Lagosians are suffering… I have seen women under the bridge with their belongings and children. I have been to hospitals for inspection but they do not have facilities. Why are Lagosians still suffering?”

Speaking on how to resolve the constant traffic jam in the state, Gbadamosi said he would import fairly used ferries for residents to move through the waterways.

Gbadamosi said he would do better than previous administration in providing social amenities if elected.

Fafowora said the only solution to the traffic situation in the state is to create a metroline.

“In 1983, Lateef Jakande did a survey which recommended that Lagos needed a metroline. What we are experiencing now is because we do not have a metroline,” he said.

“A city with about 22 million people without a metroline will always encounter challenges. You’ll see it in Cairo, London, Dubai and New York. The Lagos Metroline falls in the sixth place of my party’s seven point agenda. That’s the first thing. We are bringing the New York experience to Lagos.

“We are experiencing air pollution in Lagos because the vehicles on our roads are fairly-used ones. Modern vehicles make use of LNG gas, not diesel. We will bring in new buses and make sure people replace their fairly-used with new ones through loans. Buses will be powered by LNG gas.”

Gbadamosi suggested replacing vehicles in the state with electric ones to reduce air pollution.

“We will replace private and public buses with electric ones. We will buy them in bulk and sell them to transporters at subsidised rate and let them pay back at a convenient time. Then, we can breathe in fresh air in Lagos,” the ADP candidate said.

Ogunsanya said her government would confiscate all the vehicles producing heavy smokes in the state.