Taye Currency: Why I Posted Video Of MC Oluomo Online 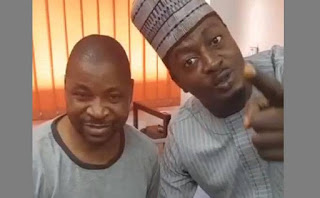 Since a chieftain of the NURTW in Lagos, MC Oluomo, was reportedly stabbed at a political rally some days back, there have been a lot of rumours that he had died from the wounds sustained during the attack. However, the rumours were finally put to rest when fuji artiste, Alh. Taye Currency visited Oluomo in the hospital and uploaded a video of both of them together.

According to Jet Royal Media , some people criticised him for posting such video just to get attention.

In a chat with Sunday Scoop, seen by Jet Royal Media, Currency revealed why he posted the video. “I had been inundated with calls from people that MC had died; so, I had to convince them otherwise. Everybody knows that whenever Oluomo comes to Ibadan, he is always at my place. We have been friends for over 25 years and are very close. Because of that, so many people were on my neck for proof that he was still alive. That was why I visited him at the hospital and made a video for the world to see that he was hale and hearty,”.