The Candidates: Kadaria Ahmed brought out the best in Atiku, says Secondus 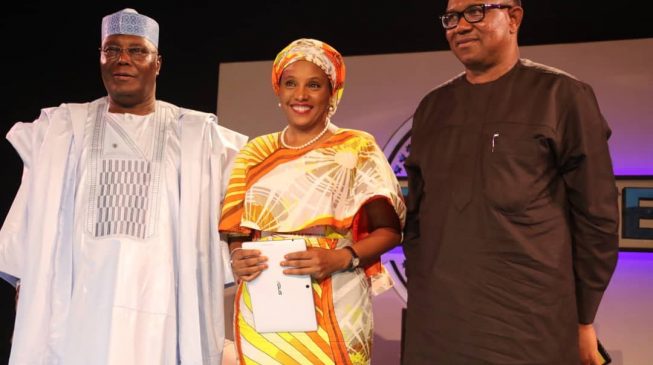 Uche Secondus, the national chairman of the Peoples Democratic Party (PDP), says Kadaria Ahmed, host of The Candidates, brought out the best in Atiku Abubakar, the PDP presidential candidate, at the town hall-style interview.

On Wednesday, Ahmed, who has been in the business of debates for over a decade, grilled both Atiku and Peter Obi, and was being accused of being partisan by many Nigerians on and off social media.

But speaking in Delta on Thursday, Secondus said she brought out the best in the Atiku-Obi duo, who he claimed outperformed the incumbent President Muhammadu Buhari, and Vice-President Yemi Osinbajo.

Secondus said Buhari made so many mistakes, and could not answer questions “fired by” Ahmed.

“But when she fired our president (Atiku), the best came out of him. You can see the president who can engage, and by the special grace of God, everything that you need; employment, food, better economy, you will see in Atiku,” Secondus said.

Secondus called on INEC and security agencies to abide by the constitution of the federal republic.

“Today, by your mandate, we warn INEC, and we believe there are good people in INEC. We know that government is pressurising INEC to rig this election. If they rig this election, they are looking for war,” he added.

“If they want peace, they should not rig this election. We want to also advice our security agencies, we know there are good people there, protecting lives and property.

“We believe that they would obey the constitution, not to break it like Mr. President (Buhari) is breaking our laws. If they break it, what are they looking for? War.”

He said President Buhari has brought disgrace to Nigeria, stating that Buhari handed over his presidential flag and mandate to the gubernatorial candidate of the All Progressives Candidate in Delta state.