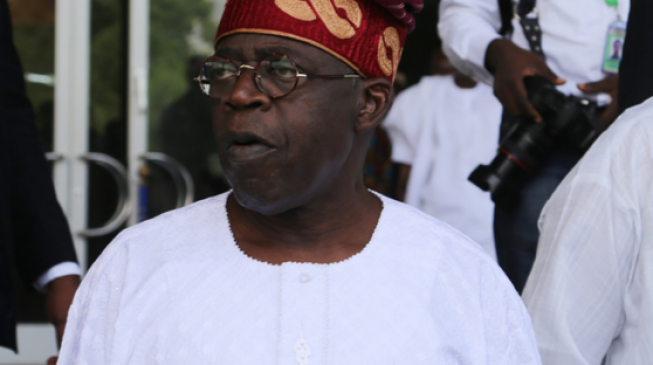 Bola Tinubu, a national leader of the All Progressives Congress (APC), says a permanent discipline awaits Walter Onnoghen, former chief justice of Nigeria (CJN), if he is found guilty of the false declaration charges levelled against him.

Tinubu said this while responding to the position of Atiku Abubakar, presidential candidate of the Peoples Democratic Party (PDP), on the suspension.

In a state of the nation address, Atiku accused President Muhammadu Buhari of clamping down on the judiciary.

But Tinubu said if the charges against Onnoghen turned out to be wrong or unproven, he would be automatically reinstated as the head of the judiciary.

“President Buhari conditionally suspended the CJN. By doing so, this allows for the case to move forward without the CCT or others fearing the CJN might use his position to unduly interfere with proceedings. If the CJN is exonerated, then he will return to his position. If not exonerated, then a more permanent discipline awaits him,” he said.

Tinubu accused Atiku of misleading the public that Buhari removed Onnoghen from office even though he knew that the president suspended him.

He wondered why Atiku was defending a “jurist who has enjoyed the sweet but hidden benefits of several million dollars of mystery money passing through his secret bank accounts even when discovered, these accounts held several hundred thousands of dollars in them”.

He said left to Atiku, Onnoghen should not be investigated despite the weighty allegations levelled against him.

Below is the statement:

The PDP’s presidential candidate, former Vice President Atiku, recently made comments regarding suspension of CJN Onnoghen. Atiku’s release is entitled “State of the nation address”. I encourage everyone to read it. In its disregard for the truth and patent misrepresentations, it will go down in political history as a classic of self-incrimination. Atiku thinks the piece exalts him. Instead it evinces his penchant for wilful misstatement that make him unfit for the office he now seeks and has always coveted.

In the statement, he claims to have dedicated all his life to the defense of democracy. Those of you who know him, and even those who don’t, know this is not true. If all of his life has been dedicated to support for democracy, then he is far too young to run for president; however, I must congratulate him for having somehow managed to find or begin a second life. This rebirth as a defender of democracy must have taken place only a few short hours ago.

His previous life of over seventy years was one of skirting democracy and of blatant impunity in attempting to enshrine reactionary government and installing an unjust political economy on the backs of the people.

In his address, he claims the nation has entered a difficult moment. To my dear and good friend Atiku, I say the difficulty is not so much with the moment but with your memory.

When you lorded over Nigeria in tandem with President Obasanjo, there were myriad court orders mandating that your government render to Lagos state the funds due it to improve the lives of its millions of inhabitants. Instead, you gladly and without dispute joined Obasanjo in utter disregard for these unambiguous legal verdicts. In so doing, you demeaned the rule of law. You also readily sacrificed the economic development and welfare of millions of innocent people in Lagos just to gain some illicit political advantage that proved to be fleeting and of no avail to you in the end.

You now speak of democracy and the need for executive restraint. But such verbal finery never crossed your lips or traversed your pen when you and Obasanjo improperly removed Senate Presidents more easily than a trendy cad exchanges a pair of shoes or changes the subject of his false affections. Your love for democracy is such that you were recently observed apologising to the PDP for not rigging the Lagos 2003 gubernatorial polls as you did the polls in the other Southwestern states.

Instead of repenting for rigging at least five states too many, your expressed regret was that you had not rigged enough; that you rigged one state less than the complete mauling of democracy your party and your principal had mandated. Regarding such a destructive love as this, I am sure democracy and fair elections would rather do without.

A few weeks ago in a televised broadcast you even revealed to the people that your official policy envisioned the base enrichment of your friends should you achieve the presidency.
I must assume that your lifetime as a defender of democracy began after this long record of unjust deeds and even after your latest statement of intent to mould Nigeria into an oligarchy. If this is not the case and if all these things you have done and said are consistent with your current notion of democracy, then there is but one conclusion. The democracy you now claim to support remains a rather strange breed of democracy, such as to be nigh indistinguishable from the regressive, rentier political economy you designed and foisted on Nigeria as the crafty lieutenant of the bullish Obasanjo.

Strange that you would choose to depict the current situation so inaccurately as to stir emotions unduly. You claim that CJN Onnoghen has been removed. However, this is not so. He has been temporarily suspended. You and your advisors should know and recognize the vast legal difference between “suspension” and “removal.” Yet you persist in conflating the two in what you say is a pursuit of justice. While true you may be in pursuit of something. It is not justice.

If justice was your goal, you would acknowledge that the CJN has only been temporarily suspended not permanently removed. Thus, your recourse to saying that the president violated the constitutional provision regarding the removal of a CJN is inaccurate in that Buhari never intended to remove the CJN. What he has done is to have the CJN temporarily get out of his chair so that the serious matters against him can be heard by someone other than himself. Should the charges show themselves to be wrong or unproven, the CJN will be automatically reinstated as the head of the Nigerian judiciary. However, for Atiku to state that the CJN should remain on seat while credible and grave charges swirl around him is to put the entire workings of the Supreme Court under a heavy cloud.

It is ironic that Atiku of all people throw such darts at President Buhari. Buhari actually exercised considerable restraint in this matter. He has reasonably balanced concerns about the integrity of the judiciary with concerns for the individual rights of the accused. Nothing has been taken from the CJN that cannot be restored if the facts warrant such restoration. Thus, President Buhari conditionally suspended the CJN. By doing so, this allows for the case to move forward without the CCT or others fearing the CJN might use his position to unduly interfere with proceedings. If the CJN is exonerated, then he will return to his position. If not exonerated, then a more permanent discipline awaits him.

This is an imminently fair and balanced approach, especially given the fact that the constitution and other laws really do not provide clear and unambiguous guidance in how to proceed in a case whether the CJN is the defendant under this unique fact pattern. While Atiku rails against Buhari because of this act of restraint, we can but imagine the tack Chief Obasanjo and Atiku would have taken if they presided over this situation. By now, they would have put CJN Onnoghen in the stocks or shipped him off to that infamous farm in Ota where he would have begun his new career in plucking poultry.

It is curious that Atiku would take up the marker of a jurist who has enjoyed the sweet but hidden benefits of several million dollars of mystery money passing through his secret bank accounts, Even when discovered, these accounts held several hundred thousands of dollars in them.

Someone in Atiku’s position would normally be wary of a judge thusly tainted. A politician in Atiku’s position should more objectively be concerned that the government would have been the source of the hidden funds or that government would use the fact of the clandestine money as leverage against the judge to make sure he did government’s bidding for surely this a jurist highly compromised by pecuniary indiscretion. It is almost unnatural that an opposition candidate would champion the soiled cause of such a judge who seems to have sold something in exchange for the money found in his vest’s secret pockets.

Yet, Atiku now cries the anguished cry of a man who thought he had won the lottery only to find he had misread the last number on his claim ticket. Or perhaps these are the tears of a man who thought he had invested in a sure deal only to see the reason for the investment evaporate before his very eyes. Now, Atiku and his cohort seek to turn their personal disappointment into a burning national issue. They seek to manufacture a constitutional crisis where none exists.

They said they suspended their campaign because of this matter. Here, they are as illogical as illogic can beget. By suspending their campaign, did that mean they were permanently ending it? Of course not! That would be a boycott or the permanent “removal” of the campaign. No, they have resumed their campaign after temporarily suspending it. If they know the meaning of suspend in this regard, only malign intent allows them to feign ignorance to the meaning of the word “suspend” when applied to CJN Onnoghen.

There is no need to quake at the solitary incident of the interim suspension of a justice pending the legal resolution of serious criminal claims against him. If this matter is shorn of the political trappings it has acquired, there is no fairer way to handle the matter.

Atiku, I gather, would rather leave the man in seat and allow the charges against him to go unattended. Or Atiku would rather that the CJN preside over his own trial. Such is the logical conclusion of Atiku’s position. It is an odd bravery that would lead Atiku to stake such a position. If Atiku is as oddly courageous as he now depicts, then let him venture a step further. Pray tell, let Atiku tell us what good and precious thing he and the PDP rendered that they cannot even countenance the temporary and conditional suspension of a single jurist until the charges of illegality against the man have been fully resolved in open proceedings conducted by his judicial peers.

Atiku claims to be a democrat and defender of democracy, but where was he, his voice and action during Abacha’s suffocating maximum rule? Was he not a member and cheer-leader of one of the five Abacha parties aptly described then as five leprous fingers of Abacha? Did he even have the courage to visit his mentor, late Major General Shehu Musa Yar Ádua, in jail for fear of Abacha stopping him from running for the governorship of Adamawa?

Dare Atiku say what is really upsetting him and what he really is hiding in his attempt to cloak his lifetime of undemocratic reckonings in the swaddling of this much too belated democratic second birth he now claims for himself.