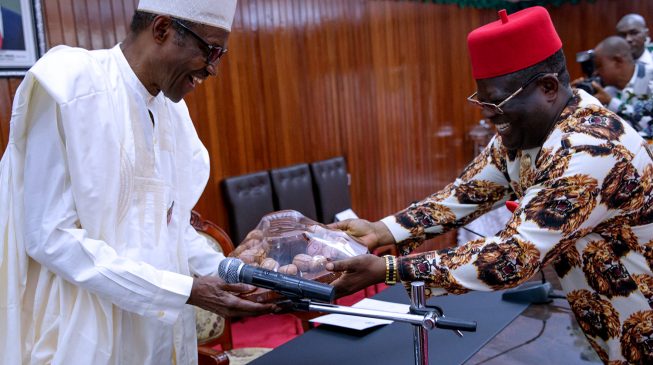 David Umahi, governor of Ebonyi state, has directed at least 2000 members of the Peoples Democratic Party (PDP) in the state to welcome President Muhammadu Buhari who will campaign in Ebonyi on Wednesday.

Umahi, a PDP governor, has also allowed the All Progressives Congress (APC) to use the Pa Ngele Oruta stadium, Abakaliki, for the party’s presidential rally.

He said the president would be accorded all necessary courtesy.

According to NAN, he disclosed this at the PDP governorship rally in Ugbodo, headquarters of Ebonyi local government area, on Friday.

“We would take our rallies on that day to our three senatorial zones while we allow them (APC) to use the stadium,” the governor was quoted to have said.

“At least, 2, 000 PDP members would receive the president at the stadium while you go about your rallies in your various zones.

“I have identified those who will receive the president; so, when you see our people at the stadium, don’t be angry, because it is my arrangement.

“We would even help them (opposition) with buses to get people from Enugu and Abia.”

He thanked the people for the support for his administration and pledged to do more if re-elected.

“I urge our party supporters not to destroy posters of the opposition party because we have the crowd and are on ground,” Umahi said.

The governor had endorsed Buhari even before the president made his reelection bid public.