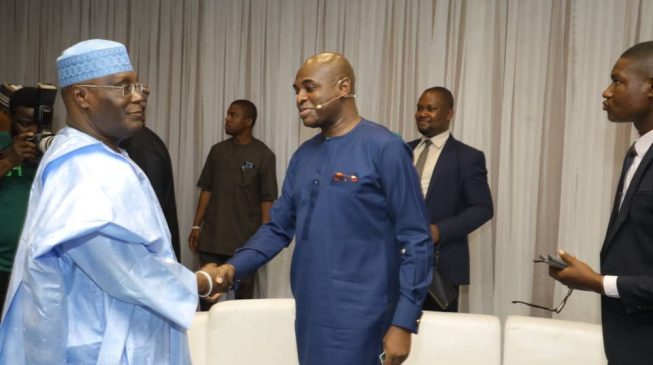 Muhammadu Buhari, the incumbent and presidential candidate of the All Progressives Congress (APC), is missing at the flagship 2019 presidential debate.

Atiku Abubakar, the presidential candidate of the PDP and the Buhari’s major challenger is late for the debate.

TheCable understands that Atiku made a last minute decision to boycott the debate, as advised by some members of his campaign council, seeing that his major challenger had shown signs that he will not be attending.

Some other members of his campaign team persuaded him to attend the debate, seeing it as an opportunity to market himself, and build a case against Buhari.

The former vice-president, who returned from the United States hours ago, tweeted that he will be attending the debate, which he termed a referendum on the incumbent.

“I arrived the Congress Hall of the Hilton venue of the #2019Debate. This debate and the election is a referendum on the incumbent,” Atiku tweeted.

Atiku eventually left the hall, Mark Eddo, the moderator of the debate, said.

The debate, which is hosted by Nigeria Elections Debate Group (NEDG) and the Broadcasting Organisations of Nigeria (BON) is currently ongoing at the Transcorp Hilton Hotel, Abuja.

The last time Muhammadu Buhari attended any Presidential debate with opponents was in 2011, when he went against Ibrahim Shekarau of All Nigeria Peoples Party (ANPP), and Nuhu Ribadu of the Action Congress of Nigeria (ACN).

Goodluck Jonathan, the incumbent and the presidential candidate of the Peoples Democratic Party (PDP), was absent at the debate, which was hosted by NN24 and moderated by Kadaria Ahmed.

In response to Jonathan’s absence, Shekarau, Ribadu, and Buhari, who were the main contenders in the election, decided to boycott the BON/NEDG debate slated for March 29, 2011.

Fela Durotoye of the Alliance for New Nigeria (ANN); Kingsley Moghalu of the Young Peoples Party (YPP); and Oby Ezekwesili of the Allied Congress Party of Nigeria (ACPN), are present at the debate.

Despite aspiring to be president since 1993, this is the very first time Atiku has come this far in the presidential process.

Atiku was, however, present at the 1999 vice-presidential debate, where he took on Umaru Shinkafi, the vice-presidential candidate of the All Peoples Party (APP) and running mate to Olu Falae, who ran with the Alliance for Democracy (AD).