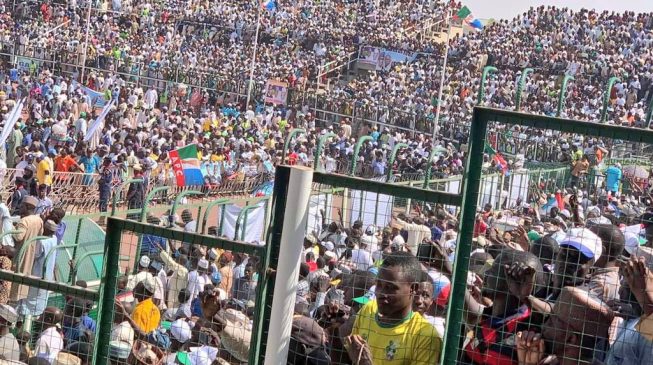 Vehicular and human activities have been suspended in different parts of Kano where the campaign trail of President Muhammadu Buhari landed on Thursday.
People lined on the streets from Malam Aminu Kano International Airport (MAKIA) to the palace of the emir of Kano and the Sani Abacha Stadium, venue of the campaign.
Our Correspondent observed that hundreds of party members from all walks of life arrived the venue of the rally as early as 7am.
Traffics have been gridlock as motorists in their hundred took over all the major roads with party faithfuls struggling to catch the glimpse of the President Buhari rally.
Security agents lost control of the situation, as the surging crowd overpowered them at the rally.
Kano is the stronghold of the president. He secured over 1.9 million votes in the state in 2015 and Abdullahi Ganduje, the governor, has promised him five million votes in 2019.
Bashir Ahmad, an aide of the president, tweeted a video of the people who trooped to the streets to receive the president.