Vote who you want, says Buhari in Imo as Okorocha, Oshiomhole back different candidates 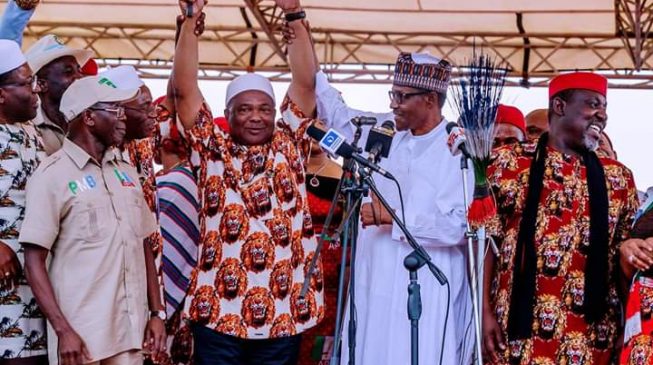 President Muhammadu Buhari has advised members of the All Progressives Congress (APC) in Imo state to work together and ensure a peaceful election.

He also asked the electorate to vote for who they want, amid the lingering crisis over the party’s governorship race in the state.

Buhari spoke at the APC presidential rally which held in Owerri, Imo state capital, on Tuesday.

He said the achievements of his administration could only be consolidated at the state level with the support of the party faithful.

“I assure you that the government will continue to strengthen the economy through sustainable programmes such as TraderMoni,” he said.

“We must also continue to revive the country’s economy and security. You can vote for whosoever you want. Do not allow intra or inter-party affairs stop you from voting for the candidates of your choice.”

Rochas Okorocha, the state governor, is supporting the candidacy of Uche Nwosu, his son-in-law who has since left the APC, Adams Oshiomhole, APC national chairman, is backing Hope Uzodimma, the party’s candidate.

During the rally, Oshiomhole said the APC is not in alliance with any other party for the March 2 governorship election.

“We are not in alliance with any other party. Our stance is clear and our sole governorship candidate is Hope Uzodinma,” he said before handing over the party’s flag to him.

Also speaking, Okorocha commended Buhari for “his love for the Igbo”.

“My President, you are a man of destiny. Your victory come 2019 has been signed and sealed. You love the Igbos and you have always demonstrated that,” he said.

“You took Chuba Okadigbo and Edwin Umezuoke at different times to be your running mates. No good result came from all that. It will be wrong for anybody to say that you don’t love Ndi-Igbo. Whoever says that is lying.

“Mr. President you were forced to look elsewhere. So it is not right that Buhari does not love Ndigbo.”