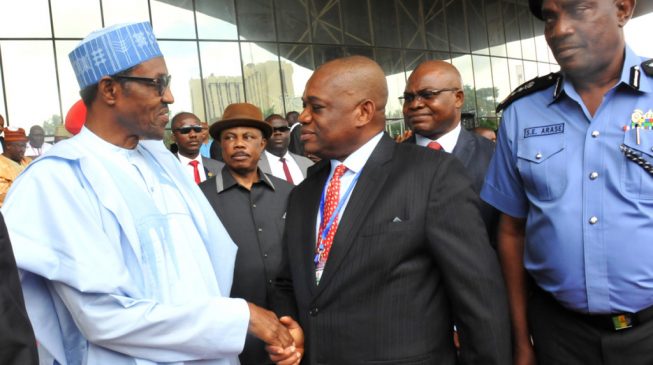 Orji Uzor Kalu, former governor of Abia state, has been appointed into the committee for the reelection of President Muhammadu Buhari.

Kalu, who is standing trial for corruption, has been out of the country on alleged health grounds.

The Economic and Financial Crimes Commission (EFCC) had filed a N7.7 billion fraud trial against the ex-governor.

The campaign team constituted by wife of the president is co-chaired by Dolapo Osinbajo, wife of Vice-President Yemi Osinbajo.

Salamatu Baiwa Umar, women leader of the All Progressives Congress  (APC), is national coordinator of the team.

Mairo Al-Makura, wife of Nasarawa governor, and Adejoke O. Adefulure will serve as vice-chairpersons of north and south respectively.

Judith Amaechi, wife of Rotimi Amaechi, minister of transportation, will serve as zonal leader of the south-south.

Festus Keyamo, a lawyer and spokesman of the Buhari 2019 campaign, and Muiz Banire, a former national legal adviser of APC, were also named as part of the team.