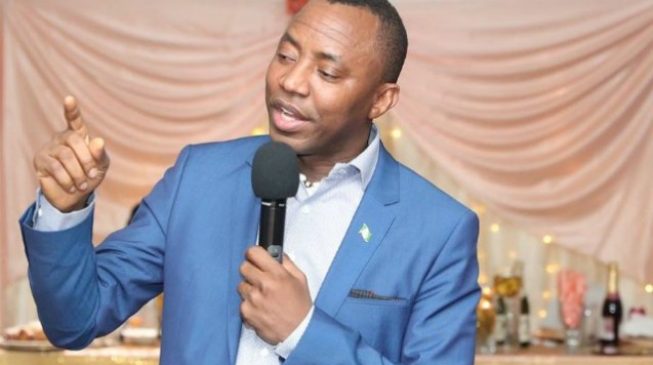 Omoyele Sowore, the presidential candidate of the African Action Congress (AAC), says if he is elected president he will strip all corrupt past presidents of their national awards.

Speaking at the Centre for Democracy and Development (CDD) BIG Debate, the publisher of Sahara Reporters, said his party will fight corruption by making the system transparent.

“It is very very important that, in dealing with corruption in Nigeria, we start using technology to aid prevention.  There is what they call blockchain technology, there is encryption.

“Our biggest problem is the opaque nature of how we do our transaction in the public sphere, and the lack of transparency in the way we conduct our businesses.

“The moment you remove that, all the thieves will be hung out dry, because before they get anything done, we have seen it, we have tracked it, and we ensure that we nip them in the bud.

“If we are doing contracting, it must be transparent to all. There is no reason why an average Nigerian cannot tell how much we are making in the so-called TSA. How much is there? We are entitled to it, how is money moving?

“The second thing we need to do is that a lot of our assets is also publicly available. The land registry of Abuja, you cannot find it, because the whole of Abuja is owned by a few people.

“The asset declaration forms of public officers is something that an ordinary Nigeria can download. Without having to go through the eye of the needle.”

He said corruption should not be left to the police to fight alone, it should be a collective battle, suggesting that incentives should be remooved.

“Let us also talk about enforcement. Sometimes, when money is moving around, there is paperwork and paper trail, we have an NFIU, they know when thieves are stealing money, but if you don’t put the right people there, you are wasting your time, because they would never whistleblow on these guys who are stealing.

“I and our party will remove everybody who has a national award, who were shown in this movie shown by CDD today, we would remove all their national awards, all the GCFRs, the GCONs, the MONs, who are involved in corruption.”

Sowore said he would do this so young people will know that corruption does not pay.