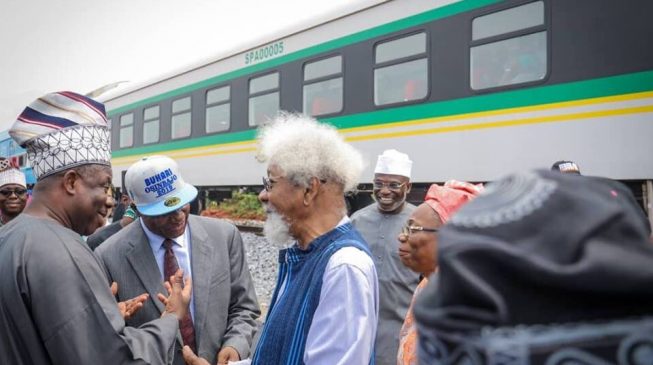 Nobel Laureate Wole Soyinka, the Alake of Egbaland, Ibikunle Amosun, and Rotimi Amaechi witnessed the test ceremony of the Lagos-Ibadan rail project in Abeokuta on Friday.

The train, which rode officially for the first time in decades, took a trip from Iju, Lagos to Abeokuta, with Ibikunle Amosun, governor of Ogun state on board.

Amaechi, who spoke at the flag off, said the train was moving at a speed of 60 kilometres per hour, but could potentially go as fast as 150 kilometres an hour.

Soyinka, while speaking at the ceremony in Abeokuta, said the where the new megastation would be was his hunting field in his youthful years.

He added that the expedition from the spot will be a rocket to another planet.

SOYINKA: I DON’T GIVE A DAMN WHO FIXED THIS

Also speaking at the ceremony, Soyinka, who recently endorsed Kingsley Moghalu of the Young Peoples Party (YPP) for the highest elective office of the land, said he does not care who fixed the rails.

“This plateau seems to be naturally donated for this kind of enterprise, one of these days, from this platform, a rocket will go to the next planet,” he said.

“I don’t give a damn who put this there, it doesn’t matter whatsoever, as the Yoruba adage goes, let a man see a snake, let a woman kill the snake, just let the snake be killed,” Soyinka said in a mix of Yoruba and English.

Soyinka had publicly rejected the candidacy of incumbent President Muhammadu Buhari and his chief challenger, Atiku Abubakar of the Peoples Democratic Party.

Also present at the ceremony in Abeokuta were officials of the South African railways and the CCECC.