Army, police speak on how ’66 people’ were killed in Kaduna 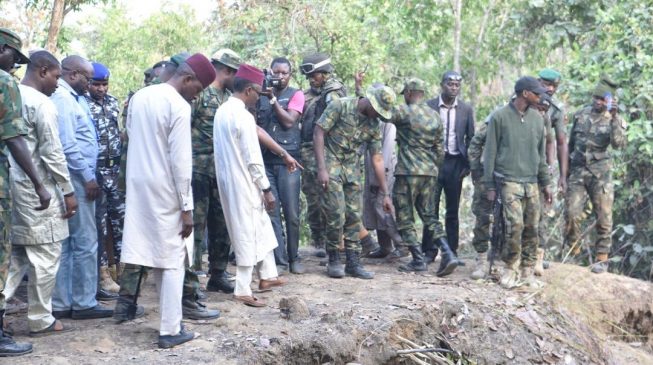 The Nigerian army has confirmed the killing of 66 people in eight different communities in Kajuru local government area of Kaduna state.

Faruk Yahaya, general officer commanding (GOC) 1 division of the army and Ahmad Abdulrahman, the state police commissioner, confirmed the mass killing on Saturday when they accompanied Nasir el-Rufai, the state governor, on a tour of some of the affected villages.

While responding to the governor’s question on the casualty figure, the GOC said 66 people were killed.

He said 37 of the victims were killed at a river bank, while the killing spread to other villages within the local government.

“As far as we are concerned, what we reported was 66, comprising male, female and children,” he said.

“We have shown you the other area in that village, where according to information, the residents were lured to that riverine and were slaughtered.

“A total of 37 were said to have been buried there. You have seen the grave there and you have also seen elements of their materials that were on the ground, including some traces of blood.

“Now information has it that it also spread to other villages. Various distances from here, some, one kilometre, some two kilometres. You know how the Fulanis are, they are far apart. That’s the information we have.”

The state police commissioner said the six people arrested were being questioned on the role they may have played in the massacre.

He said those arrested would be charged to court on Monday, adding that detectives have been dispatched to track and arrest various suspects.

“Even today, we effected some arrest. They are right now undergoing interrogation at the state CID (criminal investigation department). When I get back, we are going to reveal what they have gotten so far,” he said.

Following the killings, some groups accused the governor and the security heads of not visiting Angwan Barde, the Adara community where 11 people were killed among the affected villages.

The Adara Development Association (ADA) said el-Rufai was guilty of  “bias and manufacturing deliberate lies” against their ethnic group.

In a statement on Sunday, Luke Waziri, national secretary of ADA, said the governor is “trying to instigate a crisis in the area by mischievously leaving out the 11 Adara people who were killed.

On Saturday, Chidi Odinkalu, a human rights lawyer, also accused el-Rufai of lying about the casualties and the timing of the attacks.

He said although there were killings were recorded in the Kajuru LGA last week, the casualties were not more than 11.

Odinkalu  said he contacted many sources in the state, including residents, traditional and religious rulers and nobody confirmed the incident resulting in 66 deaths.