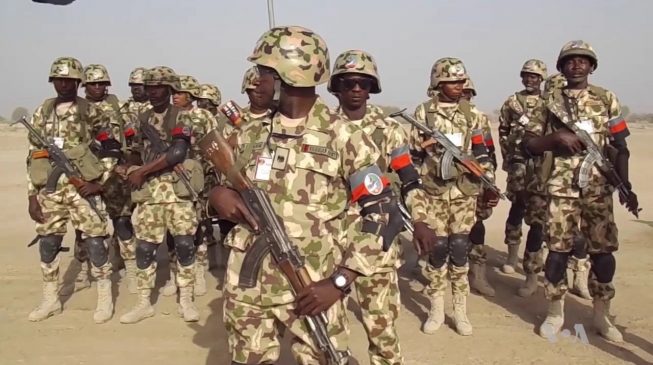 The Nigerian army says it would remain apolitical and its actions guided by the rules of engagement during the general election.

President Muhammadu Buhari, candidate of the All Progressives Congress (APC), had on Monday warned those who might want to snatch ballot boxes would do so at the expense of their lives.

The president said he rarely gives the military and the police the power to be ruthless, and “anybody who decides to snatch ballot boxes or lead thugs to disturb, it may be the last unlawful action you will take.”

But in a telephone conversation with TheCable on Tuesday, Sagir Musa, army spokesman, said the army’s involvement starts and ends with provision of peaceful and secure environment for the conduct of the elections.

“Our actions are guided by the extant rules of engagement and code of conduct. The constitution of Nigeria is the grundnorm guiding all our actions,” he said.

WHEN DOES THE RULES OF ENGAGEMENT SET IN?

When the army is dealing with crime or assisting the civil authorities like the Independent National Electoral Commission (INEC) to restore law and order during a crisis situation, it is under obligation to strictly observe relevant provisions of the laws.

These include legal procedures for dealing with riots and unlawful assembly, powers of search and arrest, and the use of force.

In the army’s guideline on the use of force, there is no hard and fast rule to determine whether a particular degree of force would be reasonable. The commander on the ground should decide taking the prevailing circumstances into account. He and his troops are responsible for their actions.

In principle, however, force may be used provided it is necessary and reasonable in the circumstances, and in the exercise of powers of arrest and quelling of disturbances.

When seeking the standing of the police in this matter, Frank Mba, the spokesman, said he doesn’t speak for the presidency.

“I am not a fit and proper person to comment on that,” he told TheCable on the phone on Tuesday.

The electoral act (2010) prohibits anyone from snatching electoral materials, and Section 129 subsection (4) of the act only prescribes a maximum two years imprisonment for offenders.

Criticisms have continued to trail the president’s comments, but Bola Tinubu, a national leader of the ruling All Progressives Congress (APC) had argued that Buhari’s directive is not for security agencies to shoot indiscriminately but aim at only those who disrupt the electoral process.