Ballot-snatching: Here’s what the law prescribes for offenders 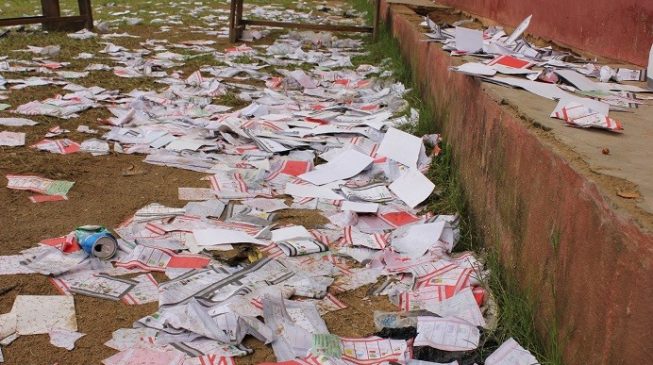 On Monday, President Muhammadu Buhari said anyone planning to snatch ballot boxes during the elections will do so at the expense of his own life.

The president, who spoke at an emergency meeting of leaders of the All Progressives Congress (APC) in Abuja, warned against interference in the electoral process.

Buhari hinted that he had given security agencies the go-ahead to be “ruthless” with anyone found wanting of  violating the electoral law.

Buhari said: “Anybody who decides to snatch ballot boxes or lead thugs to disturb, it may be the last unlawful action you will take.”

Many people have condemned the president’s statement which has been interpreted to mean a licence to kill citizens.

While the president may have issued a punishment for offenders, there are constitutional reprimands for election violators, including the snatching of ballot boxes.

The electoral act (2010) prohibits anyone from snatching electoral materials.

It reads: 129 (1) No person shall on the date on which an election is held do any of the following acts or things in a polling unit or within a distance of 300 metres of a polling unit-

(a) canvass for votes;

(b) solicit for the vote of any voter;

(c) persuade any voter not to vote for any particular candidate;

(d) persuade any voter not to vote at the election;

(f) be in possession of any offensive weapon or wear any dress or have any facial or other decoration which in any event is calculated to intimidate voters;

(h) use any vehicle bearing the colour or symbol of a political party by any means whatsoever;

(i) loiter without lawful excuse after voting or after being refused to vote;

(j) snatch or destroy any election materials; and

(4) Any person who snatches or destroys any election material commits an offence and is liable on conviction to 24 months imprisonment.

Section 128 of the act adds that “any person who at an election acts or incites others to act in a disorderly manner commits an offence and is liable on conviction to a maximum fine ofN500,000 or imprisonment for a term of 12 months or both.”

Section 131 of the same act further states that anyone who uses force, threats, violence or restraint is liable on conviction to a fine of N1 million or imprisonment for a term of 3 year.

In  a bid to defend Buhari, Bola Tinubu, a national leader of the APC who was also at the meeting, said the president’s directive is not for security agencies to shoot indiscriminately but to aim at only those who disrupt the electoral process.

But from the provisions of the electoral act as seen above, shooting of offenders is not among the recommended punishment stipulated by law.