Ben Nwabueze on Onnoghen: Buhari must resign for bringing this mess on us 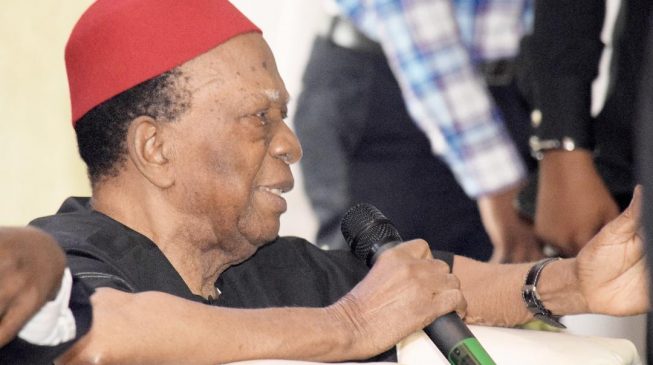 Ben Nwabueze, a senior advocate of Nigeria (SAN), has called for the resignation of President Muhammadu Buhari over the suspension of Walter Onnoghen, chief justice of Nigeria (CJN).

He also asked Abubakar Malami, attorney general of the federation, and Danladi Umar, chairman of the Code of Conduct Tribunal (CCT), to step down over the issue.

In a statement on Thursday, the elder statesman said the roles the three played in the suspension of  is part of a plot to manipulate the presidential election.

On January 25, Buhari suspended Onnoghen and swore in Ibrahim Tanko Muhammad, the next in order of seniority, to replace him.

Nwabueze said by that action, Buhari had subverted the constitution in a “most condemnable” way, hence the need for him to resign.

He raised three lines of argument in which he questioned the CCT’s “power to order or direct the president to suspend the CJN”.

He also questioned Buhari’s right to carry out the order, adding that the circumstances in which the CJN was suspended suggested a pre-meditated plan to subvert the constitution.

”President Buhari’s suspension of the Chief Justice of Nigeria from office is, in itself, a most condemnable subversion of the Constitution, but his statement while announcing it to the public makes the action so absurdly subversive,” the statement read.

“By this action the President has lost all his integrity and fitness to govern, and should not remain in office.

”The ‘administration’s avowed respect for the Rule of Law’ and for obedience of court orders sound like a deliberate perversion of truth, as witnessed by Dasuki’s continued detention four years after a court of law ordered his release on bail, and same as Ibrahim Yaquob El Zakzaky two years after he was granted bail.”

Nwabueze also made reference to a report of a N10 million corruption allegation levelled against Umar, which he said makes the CCT chairman’s integrity and impartiality questionable.

“The ex parte order issued by the CCT, on which the President relied as authority for suspending the CJN, calls in question the integrity of its chairman, Justice Danladi Umar, as well as his impartiality as arbiter in the matter. Allegation of corruption has been levelled against Justice Umar in the Sunday Vanguard of 15th November, 2015,” the statement read.

”It is surprising that in spite of all this, Justice Umar is still in office as chairman of the CCT, which suggests that he is being kept there as part of a pre-planned subversive design aimed at manipulating the 2019 presidential election.

”This sad episode in our history would not be completely resolved by the resignation of Justice Onnoghen, as is being suggested in some quarters, unless the President, as the person who brought this whole mess upon us, also resigns. The Attorney-General of the Federation (AGF), Abubakar Malami (SAN), and Justice Danladi Umar must also resign.”