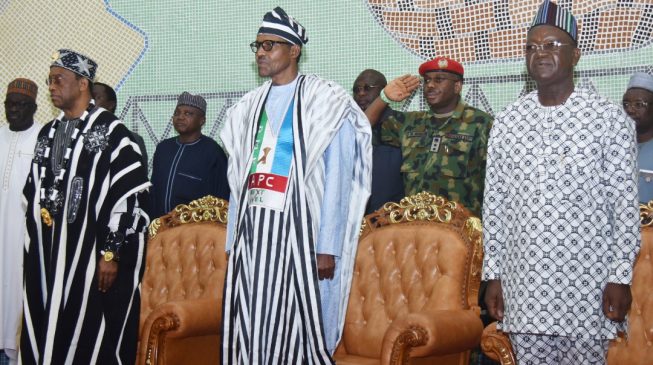 Samuel Ortom, governor of Benue state, says Benue belongs to President Muhammadu Buhari and he can do whatever he likes there.

Ortom said this at the Nigerian air force base, Makurdi, the state capital, while speaking with journalists on Wednesday.

The governor was at the base to receive the president for the state’s All Progressives Congress (APC) presidential rally.

“He is the president of the Federal Republic of Nigeria and whatever he is doing, it is our responsibility to give him adequate protocol,” he said.

“He is our president, and this is beyond party… so I am doing all the needful. There is no special thing in what I am doing, it is what I am supposed to do as governor of Benue state irrespective of party because he remains my president and I respect him.

“I have no personal issues with him; we talk about policies and issues there is no personal grudge. So, I am here to receive him, and I have made adequate arrangement. This state belongs to Mr President. So he has access, he can be here and do whatever he wants.”

Ortom defected from the ruling APC to the Peoples Democratic Party (PDP) in July and fell out with the federal government.

The Economic and Financial Crimes Commission (EFCC) had frozen the accounts of the state but the restriction was lifted few days after.

In August 2018, Terver Akase, spokesman of Ortom, had alleged that the federal government was planning to cage his principal with a flight ban.

The governor had earlier said there would be no campaign for elections in Benue if there is no solution to the clashes between herdsmen and farmers.