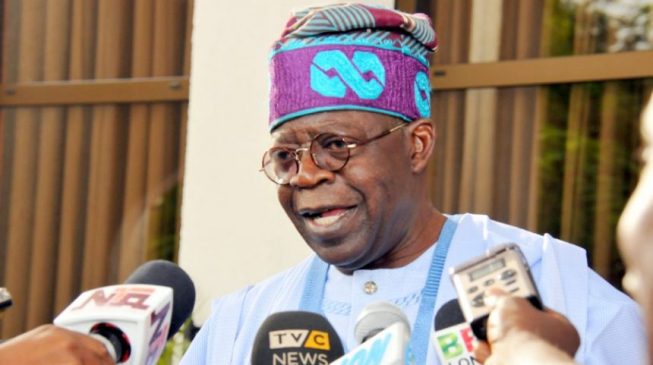 Bola Tinubu, a national leader of the All Progressive Congress (APC), has explained what President Muhammadu Buhari meant by saying the live of anyone who snatch ballot boxes during elections is at risk.

At a meeting of APC leaders in Abuja on Monday, Buhari said: “Anybody who decides to snatch ballot boxes or lead thugs to disturb the election, maybe that would be the last unlawful action he would take… I have directed the police and the military to be ruthless.”

The statement had generated different reactions from the public, with the opposition Peoples Democratic Party (PDP), saying the president had given the licence for citizens to be killed.

But speaking with reporters at the end of the meeting, Tinubu said Buhari’s directive is not for security agencies to shoot indiscriminately but aim at only those who disrupt the electoral process.

“I was in that meeting; the president was just reinforcing the fact that if you you are out there snatching ballot boxes, and causing destruction, you are at risk of your own life,” he said.

“Whatever happens to you; no president will give an order that his own citizens should be shot summarily. No! No, its okay, emotions are running high these days. Any individual including myself can be misinterpreted.

“These are not his words; he is a law abiding person and he understands categorically and clearly what rule of law is and the lives of individual citizens, that he is in that office to protect.

“Now, let me run this; he has been fighting Boko Haram, kidnappers and all these before this election, did you hear him asking them to be shot and executed summarily? If he has gone through that in the last five years, please give a benefit of the doubt.”

Speaking on the postponed elections and INEC’s stance on campaigns, Tinubu said the electoral act allows for campaigns 24 hours to elections.

“By law we should continue to energise our people; it depends on our resources. Because the Electoral Act allows us to that; and ask led us to stop campaigning only 24 hours before the actual election,” he said.

“And once you have change the date to February 23, you have given us the opening to campaign and energise. If you have a garden and you don’t nourish with water, the grass will remain dormant; we don’t want our party to remain dormant.

“This is ability of leadership to convert adversity to opportunity and prosperity and that’s it; that’s what we must do.”

On if the postponement cast doubt on the credibility of INEC, Tinubu said, “It depends on how it is handled and the process. How the process is managed; you can convert in crisis–a situation of adversity to an opportunity and progress

“The INEC, under the law , they are empowered to postpone, cancel and do whatever is necessary to ensure free and fair election. No party no matter the anger, the disappointment, no party can reverse that. So, we are ready for February 23.”