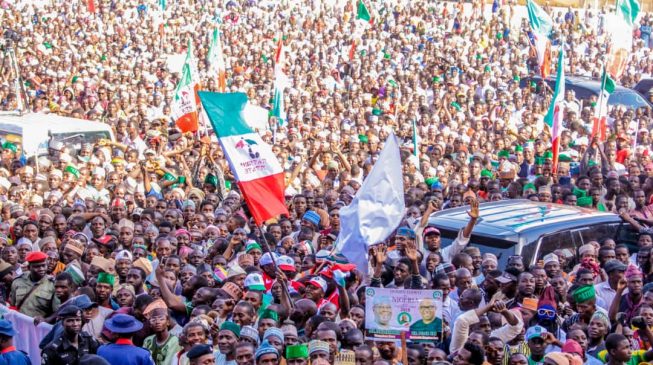 The conference for peaceful election organised by ex-President Goodluck Jonatahn has warned African politicians against referring to their opponents in “unsubstantiated” names.

The conference, chaired by Abubakar Abdulsalami, former head of state and chairman of the National Peace Committee, was attended by over 500 participants,  including former heads of state, members of the diplomatic community, development partners, the police and civil society organisations.

The participants, in a communique issued at the end of the conference, said name-calling like “looters”, “liars”, could trigger violence, especially in the election period.

According to the statement, the participants observed at the end of the conference that “violent conflict affects the psyche of people and the memory of it lingers for generations.

“There is an increasing  use of politics, particularly, elections as instruments for dividing the population on the basis of primordial sentiments, such as ethnicity, religion and geography.

“Nigeria as a regional leader is so strategic to Africa that its politics and governance should represent a positive example.

“A significant number of the elections on the continent have been marred by varying degrees of violence, resulting in the preventable loss of lives and destruction of property.

“Politicians in Africa should avoid actions that may trigger election-related power struggles similar to those experienced in Liberia, Sierra Leone, Kenya and Cote d’Ivoire to prevent the attendant consequences.”

The participants, after their observation, recommended that African politicians settle conflicts amicably in order to forestall violence.

It advised the Nigerian stakeholders, particularly, to obey the rules during the lections, while charging INEC to discharge non-partisanship and professionalism in its duties.

“Politicians in Africa should use politics as a platform for building peace and strengthening cooperation across cultures, religions, ethnicity and political alignment,” the statement read.

“Efforts towards strengthening democracy should focus more on the delivery of good governance in the polity and allow for people participation.

“Stakeholders in the 2019 general elections in Nigeria should play by the rules and avoid utterances and actions that may precipitate violence.

“The Independent National Electoral Commission (INEC) and security agencies should be professional and non-partisan in the performance of their duties.

“African leaders and politicians should refrain from labelling opponents as liars, looters and enemies as such unsubstantiated name-calling could trigger violent reactions.

“Efforts should be made by national governments, civil society organisations and community leaders in Africa to prevent post election crises.

“Regional and sub-regional organisations like the African Union and ECOWAS should encourage and promote good governance by establishing a reward system for exemplary leaders in Africa.

“Inclusive and people-centred leadership should be the focus of national governments in order to mainstream peace-building in the course of governance.

“The government of Nigeria should ensure the security of lives and property as enshrined in the nation’s 1999 Constitution before, during and after the 2019 general elections.”