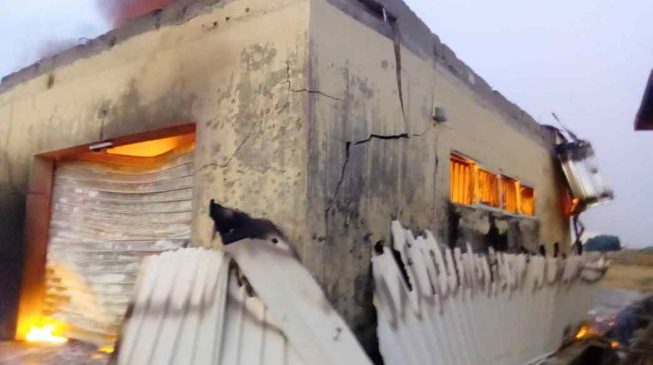 The Coalition of United Political Parties (CUPP) has accused the All Progressives Congress (APC) of conspiring with security agencies to set electoral materials ablaze in the stronghold of opposition parties.

Ikenga Ugochinyere, spokesman of CUPP, said this in a statement issued after reports of the fire incident in Anambra state.

The Anambra incident happened days after fire destroyed permanent voter cards and other materials at INEC offices in Abia and Plateau.

Ugochinyere alleged that the plot is the federal government’s idea to stop the opposition from winning landslide and to also disenfranchise eligible voters.

The CUPP spokesman demanded that elections should be conducted manually in areas where election materials have been burnt.

“Opposition political parties have noted with concerns that members of the ruling All Progressives Congress, being aided by unscrupulous security agents, have been busy burning election materials in offices of the Independent National Electoral Commission in parts of the country they recognise as areas of strength of opposition,” he said in a statement.

“The latest fire that erupted in INEC office in Anambra State was meant to stop election in that area in order to deny the Peoples Democratic Party of victory.

“We have it on good authority that they are planning to burn down more INEC offices and materials so that election can be declared inconclusive in the affected areas and therefore weaken the opposition.”

Ugochinyere wondered why security operatives could not stop arsonists.

He said the ruling party was also considering making elections inconclusive in some areas so that they could use security agents to intimidate non-APC members.

Ugochinyere said there were plans to burn down more electoral materials before the polls.

“Part of their strategy is to either make elections inconclusive in the affected places and hold rerun elections on separate days so that they can use security agents against opposition members,” he said.

“Why is it that military and policemen attached to these offices cannot stop these wicked people from burning down these offices if they are not part of the plan?

“We are aware that they are planning to carry out similar act in Rivers, Kwara, Adamawa and some local governments in Kano.

“We ask that security agencies should rise up to their responsibilities and secure all INEC offices and election materials nationwide. We plead with the international community to continue to note these acts of desperation by the ruling party.”