ENAKHENA:Our God is a God that specializes in turning nothing into Something 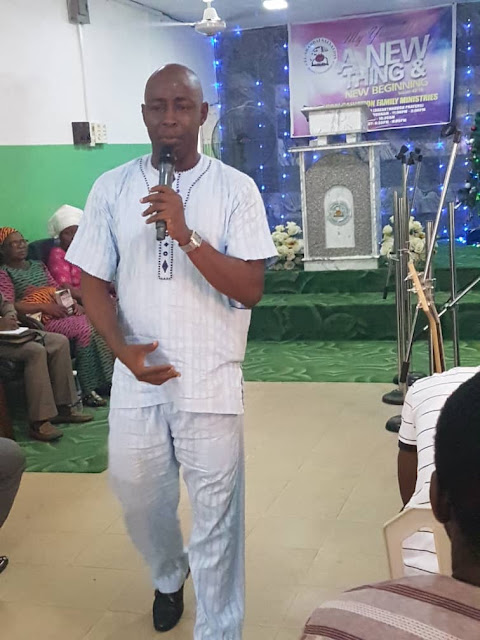 Looking unto man for qualification instead of God is living a whole life collecting dust…this is one startling realization brewed up by apostle Benson Enakhena’s preaching on the topic “When God Qualifies A Man”. The general overseer, El-Shaddai Salvation Family Ministries (ESFM) kicks up divine insights whenever he preaches and on Sunday 27, January 2019 members of his church were given fresh insights cogent for one in life. 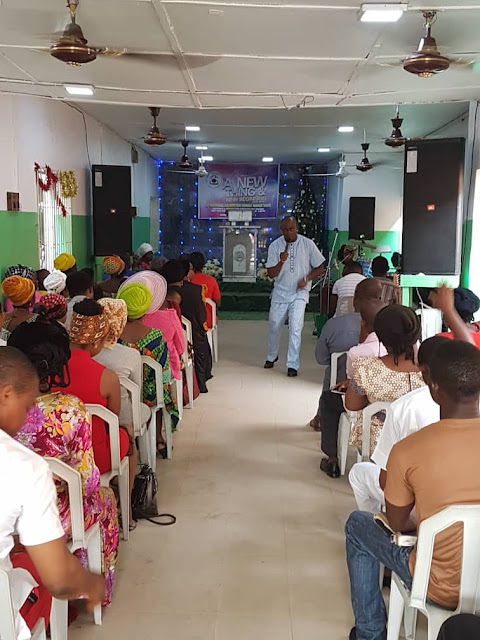 Enakhena said that when the Lord qualifies one he prepares the way for the person–it doesn't take God anything to qualify a man, the problem with man is that we are dragging with the qualification of God…we want it our own way.

Reading 1 Corinthians 1:21 he said that God is not interested in a man that is already qualified. That is why Jesus Christ asked the people that what is the difference between a man that is healthy and the physician? In any area you are sick Jesus is the greatest physician.

“When you are talking about foolishness it is not normal character foolishness, we are talking about people who walk in the ways of God, doing the will of God, you look foolish at that moment but you are the wisest in the presence of the Lord–when you are doing the will of God you are stupid in the presence of humans, you are nobody, you are condemned, people look at you as a hypocrite because you are standing on the truth, you are acting the truth or walking in truth–if you are born again no one has despised you then you are not born again–it is this discrimination that brings about a rotation that no man can control in a family and nobody is looking at it…whereby a family that was wealthy in 1980 will be terribly poor in 1990 and another family poor in that same 1990 will be wealthy in year 2000…check your family, check your background.

“It is easy for a poor man to please God but very difficult for a wealthy man because 80% of us once we are wealthy we will look at God as if he’s just there–we pray fervently for God to give us something and when He gives us that thing, it becomes what stops us from going to the presence of God.

After reading: and God has chosen the weak thing in the world to shame the things which are mighty, Enakhena said that when God came to the world He created fish and so many things but he used something natural to create man–sand is what you see everywhere, is sand not a weak thing? It is not what you look for but God said no to the fish, bird, tree and other things and went to the weak thing and said I am going to mold my image, my likeness from this thing and that is exactly what He did…He molded the sand breathe his breath into it which gave the sand life –that is why you are here today, that is why you are alive today, that is how we were created, the key reason we are not like that animal and certainly not like that tree–our God is a God that specializes in turning nothing into something–when God qualifies nothing it becomes something.

“God qualified man by breathing on what? Sand and sand became human–human received blood it became bone, marrow and then the love of God entered into it by the breath of God and God qualified him and said go and dominate, go and multiply, you are the dominion of this earth, Genesis 1:28.

“Tiger is stronger than man but it cannot live in the habituation of man. It is afraid of man because man is a replica of God –the bible says you are a little God. If a lion comes here now we will gather against it and have it put in the zoo, do animals have a zoo for humans? This is because God has qualified us to subdue them, tell them what to do, their boundaries and where to go. They are even food to us.

“When Israel gathered and said no we don’t need a spiritual leader God said okay if that is what you want you can have Saul and Saul became the king he was not qualified for–when God  doesn't qualify a man he cannot excel but when God qualifies you…He said a thousand shall fall on your left and ten thousand by your right–God’s qualification don’t mean you won’t face battles but because He qualified you He is the one to fight the battle for you.

EXTRA: This year God will disqualify your enemies, Enakhena pronounces

“When David came God said yes, this is a man qualified for my anointing. Immediately David was qualified by God through his anointing he changed from fighting for animals to start fighting for the children of God…from that day his life never remained the same.

“After David was anointed nobody recognized him–once you carry that qualification no one recognizes you until something happen–Goliath gave Israel a mandate and the bible said they were greatly afraid –Saul was afraid because God did not qualify him. A man that God qualifies is not afraid of any battle, he is not afraid of anything that comes before him–when David was going for the battle he did not put God aside because he knew that it was the almighty God that qualified him–the I am that I am, the beginning and the end, the Alpha and Omega, the one that is greater than the greatest, higher than the highest, stronger than the strongest, is going with him to that battle–and when God qualifies you no man can prepare you for victory–David removed the armor he was wearing and went to Goliath with a catapult but he was not just holding catapult, he was holding a Holy Ghost catapult.

“At the red sea God asked Moses what are you holding in your hand? Immediately David went to war in the name of Jesus he defeated Goliath because he was qualified for the battle by almighty God”.

·        When God qualifies a man he does unusual powerful things like Elijah.

·        When God qualifies a man he becomes a solution provider like Joseph.

·        When God qualifies a man he becomes a divine fruitful person like Jacob who his name was turned to Israel.

·        When he qualifies you he moves you from grass to grace like Mordecai.