A letter Brain Ballard, a top US lobbyist, purportedly wrote to Senate President Bukola Saraki, predicting the loss of Atiku Abubakar, presidential candidate of the Peoples Democratic Party (PDP), is currently in circulation.

Saraki is the director general of the campaign of Atiku.

In the letter dated February 5, the firm of allegedly said its survey on the presidential election demonstrated that Atiku has a very slim chance of winning.

They paid millions of dollars to tell them what we already know!

BREAKING: Foreign firm hired by the Atiku Campaign Organization headed by Bukola Saraki predicts loss for Atiku
“The results of the poll are, to put it bluntly, very negative for us” 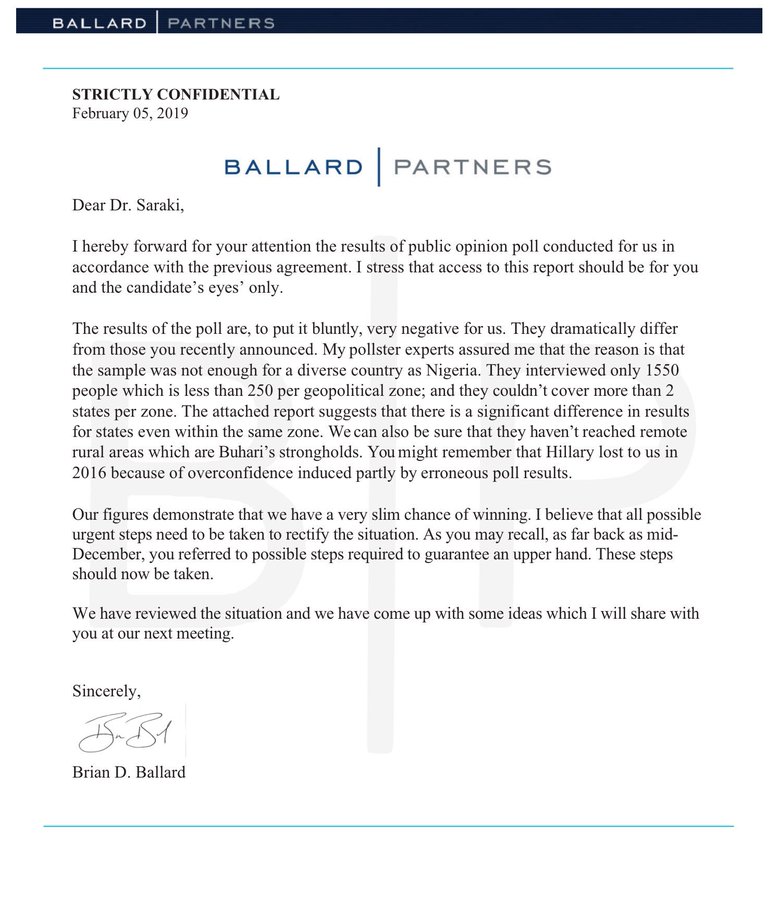 630 people are talking about this

“I hereby forward for your attention the results of public opinion poll conducted for us in accordance With the previous agreement. I stress that access to this report should be for you and the candidate‘s eyes’ only,” the letter read.

“The results of the poll are, to put it bluntly, very negative for us. They dramatically differ from those you recently announced. My pollster experts assured me that the reason is that the sample was not enough for a diverse country as Nigeria. They interviewed only 1550 people which is less than 250 per geopolitical zone; and they couldn’t cover more than 2 states per zone. The attached report suggests that there is a significant difference in results for states even within the same zone. We can also be sure that they haven‘t reached remote rural areas which are Buhari’s strongholds. You might remember that Hillary lost to us in 2016 because of overconfidence induced partly by erroneous poll results.

“Our figures demonstrate that we have a very slim chance of winning. I believe that all possible urgent steps need to be taken to rectify the situation. As you may recall, as far back as mid-December, you referred to possible steps required to guarantee an upper hand. These steps should now be taken.”

But in a statement issued on Wednesday, Ballard firm described the letter as fraudulent, adding that there is no survey conducted by the firm on behalf of the PDP.

“A letter allegedly sent by me on February 5, 2019 regarding the Nigerian presidential is fraudulent. My signature has been forged. Ballard Partners has not conducted any survey research on behalf of the People’s Democratic Party of Nigeria,” the statement read.

“The entire contents of the letter are false, and no individual employed by Ballard Partners has been involved in any of the actions cited in this phony letter.”

"A letter allegedly sent by me on February 5, 2019 regarding the Nigerian presidential is fraudulent. My signature has been forged. Ballard Partners has not conducted any survey research on behalf of the People’s Democratic Party of Nigeria.

1,131 people are talking about this