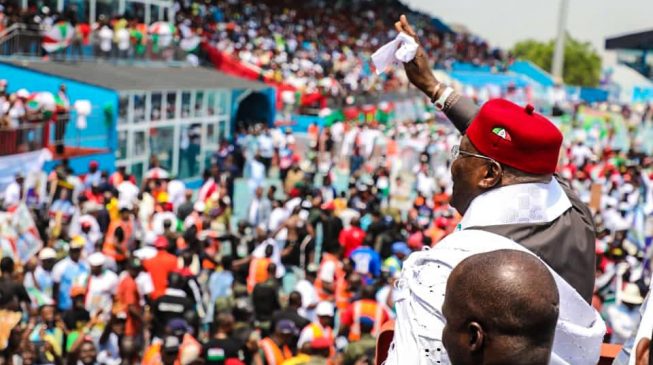 The governor had come under sever criticism in the last 24 hours over the directive that the stadium be shut down for repairs.

A source had said the facility was closed to frustrate the presidential rally of the PDP scheduled for February 10 but Abbati Sabo, spokesman of the sports commission, denied this, saying it was meant for repair of the facility ahead of the 2019-2020 Nigeria Premier League (NPL) season.

In a statement on Wednesday, Muhammad Garba, commissioner for information, said the contractor in charge of the renovation had been directed to remove all equipment from the the stadium till after the PDP presidential rally.

The renovation of the stadium aimed at giving it a face-lift, included installation of a new scoreboard, the running track and provision of sources for steady water supply to all parts of the stadium.

‘’As a democrat who believes in freedom of association, His Excellency the governor did not ordered the closure of the stadium to frustrate the campaign rally of the PDP. The stadium only closed for the intended renovation works,’’ Garba said.

While wishing the PDP a successful outing, the statement urged the leadership of the party to ensure orderliness during the event in order to avert destruction of facilities.