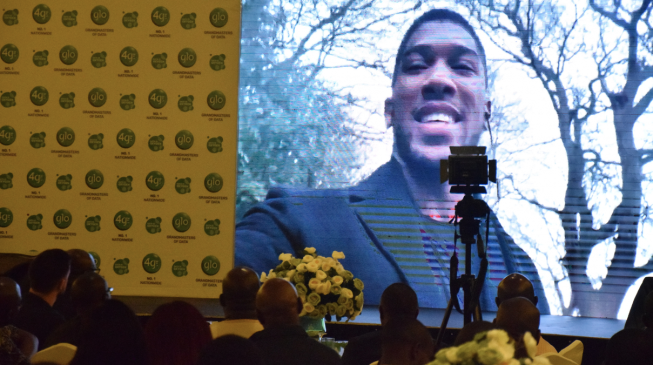 Joshua, who was born by Nigerian parents, was unveiled when the telco presented its new business direction to media executives in Lagos on Friday.

Speaking at the event, Bisi Koleoso, deputy chief operating officer of the company, said the previous year ended on a high note for Globacom Limited.

He said retaining the second largest operator with a remarkable 45.3 million subscriber base was no meant feat.

“In the year 2019, that is this year, we are counting on your support to take our business to new levels of success in telecommunication as you continually invest in our mission to drive digital revolution in our country, Nigeria,” he said.

“We plan to share with you a new communication direction which is driving the future, wherein we shall share with you our plans to help our subscribers to dream big, rule their world and glow in pride, backed by a superior network that offers high quality voice and data, striving to provide the best value for money especially in terms of voice and data offerings.

“It is a new dawn in communication. You will recall that we have since launched in the year 2003, we have been supporting the music, comedy and movie industries in Nigeria, and other African countries. Many of the musicians, comedians, actors and actresses have at one time or the other been chosen as Glo ambassadors thus projecting the continent a refreshing light through thought provoking and inspiring African movies and music.

“Today, I am pleased to inform you that we have taken this launch higher with the unveiling of Anthony Joshua, a global icon and all the student champion many times over.

Speaking in a video commercial, the heavyweight champion said”Speed, power, tenacity and the fighting spirit that Nigerians are known for, Naija, we too much, Glo I hail ooh.”