Head of Southern Command on Russia in Venezuela: ‘Anything’s Possible’ 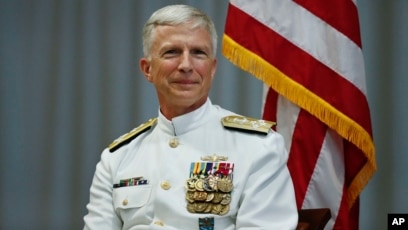 U.S. Navy Adm. Craig Faller during a change of command ceremony at the U.S. Southern Command headquarters, Nov. 26, 2018, in Doral, Fla. The ceremony appointed Faller as new leader of the command that oversees U.S. military operations in Latin America and the Caribbean.

WASHINGTON — The United States should not rule out Russian military involvement in Venezuela, according to the new head of U.S. Southern Command.

Speaking exclusively in his first in-depth interview since taking command, Navy Admiral Craig Faller told VOA that Russia was acting like a “wounded, declining bear that’s just lashing out” against democratic interests in the region.

“I think with Russia, anything’s possible,” he said. “We’ve seen what they’ve done (in Syria), and I think we have to be prepared for what might happen in the future.”

Below are excerpts from the interview:

QUESTION: “Admiral, let’s start with Venezuela. What options have you been asked to provide for the situation in Venezuela.”

NAVY ADMIRAL CRAIG FALLER, COMMANDER OF THE U.S. SOUTHERN COMMAND: “We’re focused on supporting a political and diplomatic solution and as you’d expect from a combatant commander we’re working to ensure that U.S. citizens and property, our diplomats that are there are safe, and so that’s where we’ve been, our efforts have been centered.” 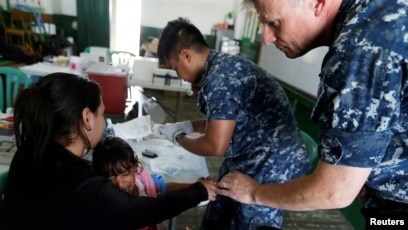 Kamila, daughter of Yenymar Vilches, a Venezuelan migrant, is attended by personnel of the ship of the United States Navy Hospital USNS Comfort at Divina Pastora High School in Riohacha, Colombia, Nov. 26, 2018.

​QUESTION: "So we’ve heard about sending thousands of troops to Columbia — everybody has seen National Security Advisor John Bolton’s memo. Has anybody asked you to provide that particular option?”

FALLER: “Again, I would refer any questions on plans to the department to the secretary’s office to the National Security Council."

QUESTION: “Are you working with your regional partners on a potential peacekeeping mission plan should the need arise?”

FALLER: “We’re focused on what you’re seeing right now, the human suffering, the day to day alleviation of that suffering. We did our part earlier this year with the United States Naval Ship Comfort.”

QUESTION: “But is peacekeeping forces, are those an option right now?”

FALLER: “We were looking, as I mentioned Carla, we’re at what’s happening today and the long-term efforts beyond government transition, I’ll leave that to policy and the diplomats, and we’ll be ready and on the balls of our feet to support when asked.”

QUESTION: “Since former Secretary of Defense Jim Mattis, when we were traveling together, he mentioned the importance of identifying a problem first. So with Venezuela, what is the problem for the United States there, and can it be solved through a military solution?” 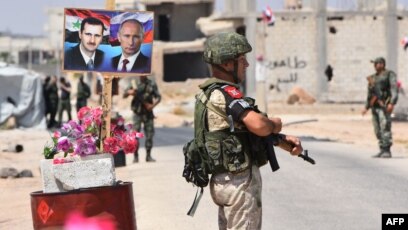 Members of Russian and Syrian forces stand guard near posters of Syrian President Bashar al-Assad and his Russian counterpart Vladimir Putin at the Abu Duhur crossing on the eastern edge of Idlib province, Aug. 20, 2018.

​QUESTION: “Are you concerned that Russia might do something in Venezuela like it did in Syria? Like we saw how they propped up the (Syrian President Bashar al-)Assad regime there. Could that happen again?”

FALLER: “I think, with Russia, anything’s possible. The national defense strategy calls out competition with Russia and China specifically as areas of focus. We’ve really aligned and done a lot of thinking, planning and resourcing to those. Different cases though. China is an economic powerhouse on the rise, and they have a legitimate economic and business interest around the world. They don’t play by the rulebook though. Russia, on the other hand, is almost, you know, a wounded, declining bear that’s just lashing out, and I couldn’t predict what Russia will do, and I wouldn’t want to. We’ve seen what they’ve done, and I think we have to be prepared for what might happen in the future.”

QUESTION: “The defeat of the Islamic state in Syria and Iraq. Your predecessor had warned of the potential for these foreign fighters that came out of your area of responsibility coming back in. Have you seen that?”

FALLER: “So we are, we’re watching that very closely. We had a significant number of foreign fighters come out of some of our Caribbean nations and go over to Syria. We’ve seen some come back. We’ve worked with partner nations to thwart some attacks, and very successfully. And we’ve got our eye on that ball every day. And we have elements of Lebanese Hezbollah. … Secretary of State Mike Pompeo gives opening remarks during the Global Coalition to Defeat ISIS meeting, at the State Department in Washington, Feb. 6, 2019.

​QUESTION: Secretary of State Mike Pompeo has said that there are active cells in Venezuela. Have you seen that as well?”

FALLER: “The long arm of Iranian malfeasance is everywhere around the world and their surrogate Lebanese Hezbollah is right at the end of that arm.”

QUESTION: “So they are in Venezuela.”

FALLER: “The secretary of state, I have ultimate respect for him, and he speaks truth to power.”