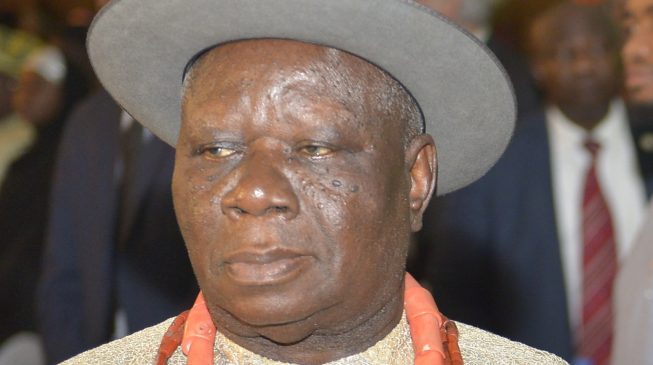 Edwin Clark, convener of Pan-Niger Delta Forum, has taken a swipe at those who said he and other south-south group collected money to endorse Atiku Abubakar, presidential candidate of the Peoples Democratic Party (PDP).

Festus Keyamo, spokesman of President Muhammadu Buhari campaign, had described the endorsement as a fraud while some of the president’s supporters said it was based on financial inducement.

But speaking at a meeting with some south-south leaders who paid him a visit at his Abuja residence at the weekend, Clark said he could feed the family of those claiming he was bought over.

“Our message is that if you want to restructure Nigeria you are our man, if you don’t want to restructure then you not a man. Those who said we have taken money from Atiku to take this position, fail to realise I can feed them and their households,” he said.

“Without restructuring, we are endangered species, we are dying out. This country belongs to all of us and the moment we begin to feel we are not important in this country, it means we are slaves.”

The Ijaw leader said the former vice-president was sincere about pursuing the restructuring course.

Clark said the report of the committee on restructuring chaired by Aminu Tambuwal, Sokoto governor, and the one of the All Progressives Congress (APC) chaired by Nasir el-Rufai, governor of Kaduna, are similar to report of the 2014 national conference.

He said nothing fruitful came out of the reports because of the president’s stance on restructuring.

“We also noted that the APC, the political party at the centre equally set up a similar powerful committee on restructuring under the chairmanship of the governor of Kaduna state, mallam Nasir el-Rufai at the end, the committee submitted its report,” he said.

“As a matter of fact, the reports of both committees were similar to that of the 2014 constitutional conference.

“The APC committee was hailed and congratulated by some of us, but the report died a natural death because Mr. President, Muhammadu Buhari, does not believe in the restructuring of this country.”