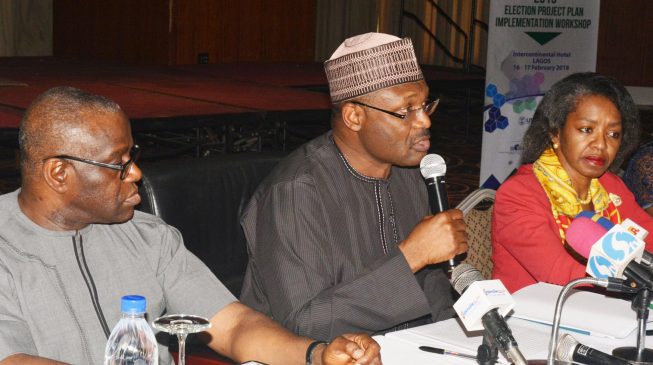 Mahmood Yakubu, chairman of the Independent National Electoral Commission (INEC), says “only an Act of God” can stop the conduct of the rescheduled presidential and national assembly elections slated for Saturday.

Yakubu said this in Abuja while addressing a cross-section of the diplomatic community and international election monitoring groups for the 2019 general election.

The briefing which was organised by the ministry of foreign affairs in conjunction with INEC, aimed at engaging with friends and partners of Nigeria on the rescheduled election.

Yakubu, who was represented by an INEC national commissioner, Mustapha Lecky, said the commission had put in place everything possible to ensure the elections held on Saturday.

The INEC chairman said the commission had no reason to feel that anything would stop the conduct of the election on February 23.

He also said that the commission had completed the deployment of materials.

“We have no reason to feel that anything will go wrong… we have received all the materials, they have been checked, audited, people have been informed, party agents have gone there to check,” he said.

The official said INEC had already taken responsibility for the postponement and that the body was committed to surpassing achievement of previous elections in the country.

He blamed the postponement on logistics and problems associated with the primaries of some political parties, which according to him delayed the printing of ballot paper