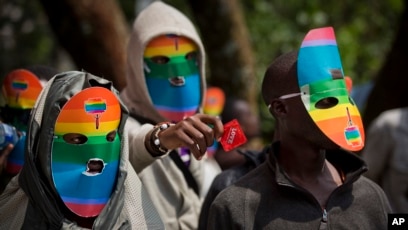 NAIROBI — There is a quiet air of excitement at the offices of the National Gay and Lesbian Human Rights Commission (NGLHRC), as the countdown draws closer to Friday when a much-awaited ruling by Kenya's High Court could make history.

The charity has fought hundreds of cases of abuse against sexual minorities in Kenya's courts, but the verdict on whether to scrap British colonial-era laws criminalizing gay sex is undoubtedly their most eagerly anticipated case.

"We are excited and cautiously optimistic — but optimistic nonetheless," Lelei Cheruto from NGLHRC, one of the groups petitioning the court to decriminalize gay sex, told Reuters.

"A positive ruling will mean sexual minorities in Kenya will have the freedom to exist. It will be a step towards their inclusion in society. We feel we have a very solid case."

Homosexuality is taboo in the East African nation and persecution of sexual minorities is rife. Under sections of Kenya's penal code, gay sex — or "carnal knowledge against the order of nature" — is punishable by up to 14 years in jail.

Campaigners say the laws have long promoted homophobia in the largely conservative Christian country — and are used daily to persecute and discriminate against sexual minorities.

They face prejudice in getting jobs, renting housing or seeking medical care or education.

Hate crimes like blackmail, extortion, physical and sexual assault are common — but most are too fearful to go to the police due to their sexual orientation, say rights groups.

A positive judgment would not only give rights and dignity to sexual minorities in Kenya, say campaigners, but will inject impetus into battles being waged by persecuted LGBT people across Africa.

"People across the continent are watching the Kenyan case very closely," said Anthony Oluoch from Pan Africa ILGA, a global charity advocating for the rights of sexual minorities.

"There are laws in many African countries that criminalize same-sex relationships, so if we get a positive ruling in Kenya it will give hope to the continent."

Same-sex relationships are a crime in more than 70 countries around the world, almost half of them in Africa. South Africa is the only African nation to have legalized gay marriage.

The law against gay sex in Kenya — sections 162 and 165 — was introduced during British rule more than 120 years ago.

In 2010, Kenya adopted its new constitution, which provides for equality, human dignity and freedom from discrimination.

However, the Kenyan government, backed by powerful Christian groups, is opposed to scrapping the ban on gay sex and argued during court hearings last year that it will lead to same-sex marriage.

A three-judge bench of the High Court is expected to give its verdict on Feb. 22. Both sides can appeal against the ruling in higher courts.

Since the date of the ruling was announced in October, LGBT activists across the world have been counting down the days on social media with hashtags such as #WeAreAllKenyans, #LoveIsHuman and #Repeal162.

"This judgment has real potential to change the lived experience of hundreds of thousands of people in Kenya," said Tea Braun, director of the UK-based campaign group, the Human Dignity Trust.

"A positive verdict will declare that LGBT+ people are not criminals. It will be a reckoning for society where Kenya will show the world that it upholds the principals of freedom, liberty and justice."

Campaigners say their optimism is justified — pointing to recent progressive rulings by courts as well as governments across the world supporting the rights of LGBT+ people — which they believe Kenya's judges will consider.

In September, for example, India's Supreme Court threw out similar colonial-era legislation in a landmark ruling in the world's largest democracy.

While last month, the Angolan government shed the "vices against nature" provision in its law, which was widely interpreted to be a ban on homosexual conduct.

The fact these moves came from countries in the developing world — which Kenyans can easily identify with — rather than Western nations which are often blamed for "importing homosexuality," should lie in their favor, say petitioners.

A positive ruling will have wider implications across Africa, which has some of the most prohibitive laws against homosexuality in the world, say campaigners.

Same-sex relationships are considered taboo and are a crime across most of the continent, with punishments ranging from imprisonment to death.

A 2017 report by the International Lesbian, Gay, Bisexual, Trans and Intersex Association (ILGA) found 33 African countries, out of a total of 54, criminalize same-sex relations.

The persecution of LGBT Africans is also widespread, with sexual minorities routinely being abused, blackmailed, assaulted by mobs, or even raped by police or vigilantes.

"Kenya is an important and influential country in Africa and there has been a lot of conversation around the continent about the court case," said Bisi Alimi, a Nigerian gay rights activist who was forced to flee persecution and seek asylum in Britain.

"It would be a huge inspiration and a morale boost to LGBT+ people across Africa. It will reinvigorate LGBT+ rights campaigns in many countries. People will feel more emboldened to talk about their sexuality and fight for their rights."

A positive verdict will also influence court decisions in countries like Botswana where the top court is set to rule on overturning similar legislation in March, campaigners add.

Petitioners, however, acknowledge there is likely to be a long road ahead — whether the ruling is in their favor or not.

Both sides have the option to take the case before the Court of Appeal and further to the Supreme Court.

They also admit that even if same-sex relations are decriminalized, challenges in changing deep-rooted homophobic attitudes in society remain.

"We are aware things aren't going to change overnight and discrimination and persecution are likely to persist for years to come," said Cheruto, adding that sustained advocacy and public awareness campaigns would be needed to sensitize people.

"It's been a long journey already, but we are prepared for the road ahead — no matter how difficult it may be."