“Man was not following God—God was still looking for man to rescue man” …what a heart? Enakhena asks

To continue and be consistent with bringing you the word of God (which is the truest of all happenings) in addition to the happenings of credible news, Godfreytimeslifestyle (GTL) was at the El-Shaddai Salvation Family Ministries (ESFM) on Sunday 10, February 2019. The Sunday school was ongoing and the ambiance in the church was joyfully interactive as members and the teacher engaged each other with questions and answers—the service progressed into a time of worship and praise (you know something, in not-too-distant-future, this is one moment in this church religious tourists would always revel in even after they had gone) where a choir member in company of her Team carried on this joyfulness with an afro-based feel of worship…the originality of her voice gave the start of the segment the needed thrill and showcased the diverse strength abounding in the ESFM Choir. The exciting aura of joy in the church lingered on until the message of the morning made it utterly cold—on this very day, Apostle Benson Enakhena broke the hearts of his members with his preaching on “The Heart of God” because even though, we well know, there’s no man with an iota of God’s heart, this message revealed how man is not following through with God after creating us in “His image and likeness” and how God has on the strength of his no-word-can-describe love for man,  has been continually giving to man, even when man lost it all… 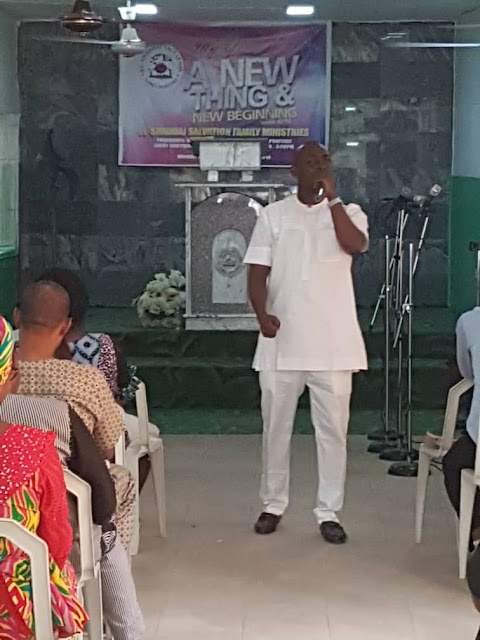 After describing the heart of God as Love, Holiness, Righteousness, Mercy, and Forgiveness, Enakhena said “We are talking about the heart of God not the heart of man…If it were so, we will go straight to the book of Jeremiah that says the heart of a man is desperately wicked who can know it—that  is why the lord said in the book of Psalm that I will prepare a table in the presence of your enemies—that  is why we the children of God today have a prayer point that says; a friend in the day, an enemy in the night”.  Stirring up the broken heart preaching little by little, He went on “I asked myself a question when I got this topic and it is: right from the time God created heaven and earth what has he actually given to himself? Absolutely nothing…Continually God is giving to man, God created heaven and earth he gave the authority to man, He gave everything to man, man lost everything—God  gave man his only son to come and die and go to the pit of hell and bring back the key that man lost and give it back to man—God  rose up and gathered the trinity: God the Father, God the Son, and God the Holy Spirit and said let us create man in our own image—He did not say let us create him like a dog or a fowl”. “I am telling you the heart of my Father this morning”, he added. 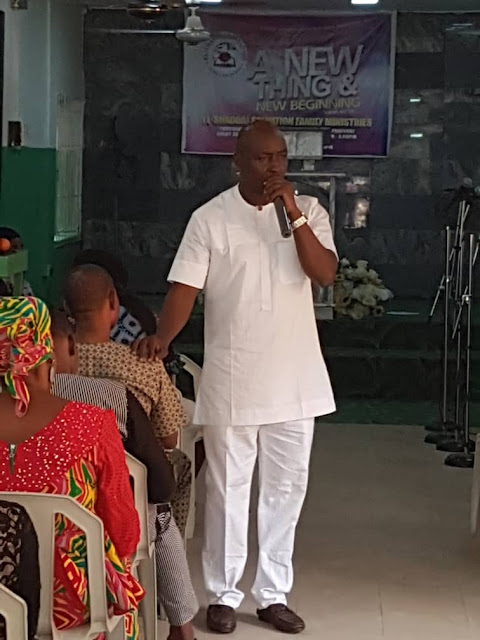 “I look at us today when we say political leaders, we don’t have political leaders in this country, we only have political rulers. But when God wanted to create man, He created man in His image and likeness and he gave authority to man, who was this man? An ordinary man. We are stressing to the people every day to obey God, what is this Ten commandments God has given to man that is difficult to follow? I observed the Ten Commandments of God and find they are all beneficial to man and not to God. 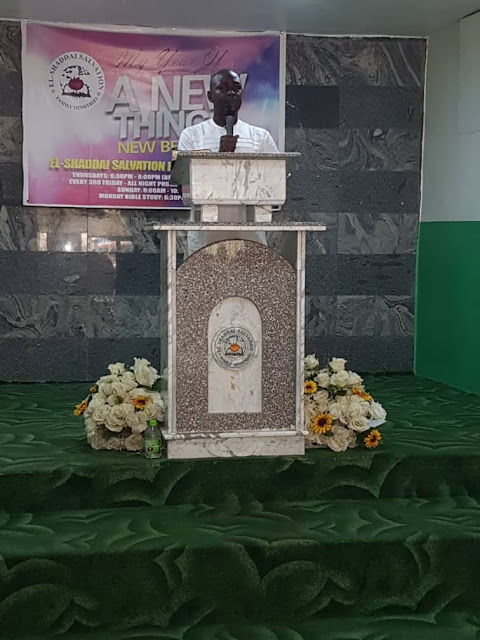 Enakhena stirred on “God loves Israel so much that he was giving them a prophet as a leader. Do you know why God was giving Israel a prophet as a leader and a king? Because he wanted someone that will help them, someone that will hear from him, someone that will guide them according to his ordinance, and show them the right path but because the heart of man is weak they were tired of the interventions of the prophet of God, they were tired of following the ways of God, so they rose up and said no! we want to be like other nations, we need a king that will rule us carnally, that will give us human love, that will give us other options and God gave them Saul…immediately they took Saul as a King what happened? The life of Israel turned upside down, they became powerless both in the Spirit and in the physical…and because Saul was not obeying the word of God, not called by God, he started disobeying God and a man that obeys God must have the spirit of perseverance—a time came, there was trouble, there was war coming in—those days before you go to war, you must visit the prophet and ask: did God say we should go to this war? Did God say we should stay back? What is the lord saying about this?

“Saul sent for Samuel the chief priest, but he stayed back because God asked Samuel to wait, trying to test Saul: even if I have not chosen this man let me see what he is going to do...is he going to wait for me? When God says wait, wait…when God says go, go…when God says stand, stand. That is what we were taught at the Sunday school that the Israelites spent more days in the wilderness because they refused to heed to or follow the word of God.

“today I see some people they try to paint the word of God to make it beautiful so that people will feel they are on top but they are lying…they just keep you floating—I told somebody lie is like water, truth is like oil—when you pour water on this street now, before your opened eyes are closed and then open again, it’s already at the roundabout…when you pour oil,  it will not move with the pace of the water, it will be very slowly but after a month, come back and you would still meet the oil and as for the water, no sign of it…that is lie—but because the heart of man is wicked, we hardly accept the truth…we quickly accept lies—when Saul was not chosen by God it was easy for the children of Israel to accept him…why? Because he was not founded in truth—when God chose David it was difficult for the children of God to accept David until God started proving Himself in the life of David.

“When God created heaven and earth He gave everything to man…“He gave” and even when man lost everything God gave him a second chance…if a man gives me one million naira to start a  business then after a while I told him I have lost the whoping sum—he will not only close the door of my second chance but other people’s door of second chance…that is the heart of a man—but when man lost virtually everything to Satan, what happened? God sent his only begotten Son—He said go, bring my children back to me and Jesus came to this wicked world—we that he came to rescue, are the ones that crucified him—when he was being nailed on the cross of Calvary He said: Father forgive them for they know not what they are doing… have you forgiven somebody that has hurt you so much?

Enakhena asked again, how many times have you forgiven somebody that has hurt you so much? Jesus said father forgive them for they know not what they are doing, he stressed.

“Have you forgiven your husband, wife, children, mother, father, friends, siblings, neighbors, relatives, workers, and the people around you? Forgiveness of God has no boundaries—that is why Jesus Christ said 70 times 7—it is so bad that the wickedness today, starts even from the Altar not the congregation—till today we are still nailing Jesus on the cross again, and again and again —and He is still staying on the right hand of God, telling his Father, forgive them, do not allow my blood, the blood I shed on the cross of Calvary to be in vain—what other love is greater than when a man lay down his life for his friend to live? For his friend to move forward? Today it is difficult, God only asked us for just one thing: Come close to me.

“Most times we make mistakes thinking praise and worship is all that God wants from us…definite no!

Enakhena furthered on, “God said David a man after my heart…why? David had the heart of God, obeyed, listened, followed and lived in the sight of God.

Citing the issue of a pastor who bragged saying if it weren’t for me, that person would have died—I said to myself, can you imagine that? Enakhena enjoined his members to ask their neighbor: who are you before God?

Describing the message as what God gave him the morning of that day, Enakhena said he had earlier prepared a message on greater heights but God said no, tell my people about my heart…tell them to follow my heart—They are following their own heart and their heart is wicked.

Again, Enakhena enjoined his members to ask their neighbor: when are you going to follow the heart of God? Chorally they asked.

“When a man follows or obeys God, He will automatically give you everything you want because God’s word is safe in your hands—God will not give you what will not be safe with you.

“Picture yourself having three kids and you also have a flourishing company, you tell them how you want the direction of the company to go, I want you to read Law, you I want you to study Accounting and then you because I want you to take over the treasury, I want you to study Business Administration…then you send these kids to school, expecting results that shows they are qualified and prepared for that which so desire for them but at the of four or five years plus in the higher institution there is no result…what is your reaction? Are you going to hand over the company to them?
Enakhena said to his members you are going to rise up this morning and tell God…prepare my heart for your blessing…every area I have being going astray, Father show me mercy and prepare me for your blessing this year”.