Osinbajo: Mentioning the name of PDP gives me headache 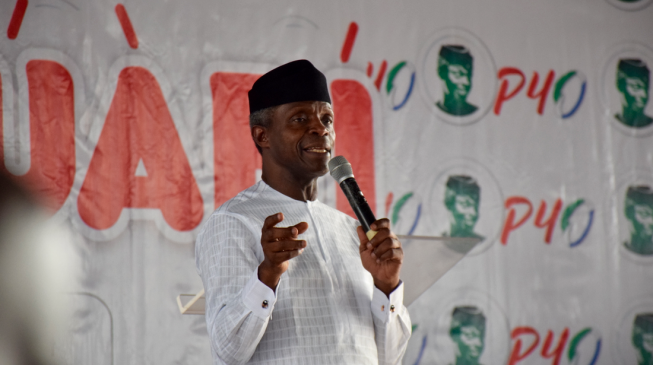 Osinbajo said this at the All Progressives Congress (APC) presidential campaign in Akure, Ondo state, on Tuesday.

Although he did not mention the name of the party, it was clear he was referring to the PDP which formed government at the center for 16 years.

He accused the PDP of neglecting Nigerians’ social welfare during its years in power.

“Don’t let us deceive ourselves. What has held our country back for so long is corruption. That is why we say we cannot go back; all of these things we are doing are things that should have been done long ago,” he said.

“We should have completed the Lagos-Ibadan Expressway by now. But we just started doing it. The ones that were doing it before, I won’t mention their names. We don’t even want to mention their names because it gives us a headache.

“They said they were doing Lagos-Ibadan but it was all a lie. Budget after budget, they didn’t do it. That is what we are doing now. It is the government of Muhammadu Buhari that is doing it now and we will finish it. If you drive on that road, you will see the work we have done.”

The vice-president said the Buhari administration is feeding 9.2 million children in 26 states every day through its home-grown school feeding programme.

He said the number of eggs consumed weekly is 6.8 million, creating more jobs for poultry farmers.

“The money that we are giving traders and small business owners, TraderMoni, we plan to do more in the next level. What we want to do next is PeopleMoni, so that a tailor, for instance, who wants to borrow money without much interest can go to that bank,” he said.

“A mechanic that wants to borrow money can go there. Artisans can go there. Then there will be the entrepreneur bank for young men and women that want to start their own businesses. All of this we are doing so that we can all go to the next level.”