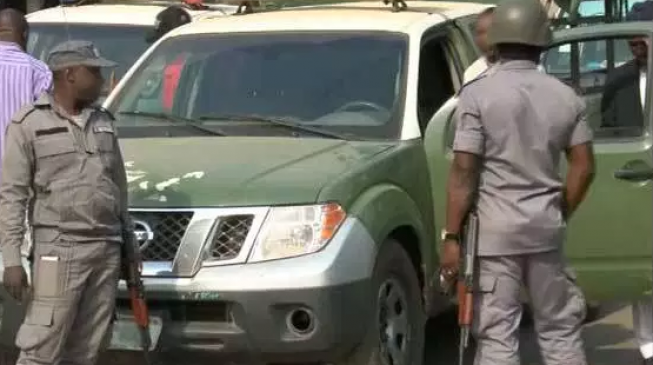 Videos where officials of the Nigeria Customs Service (NCS) were accused of killing an unarmed civilian at Shagamu interchange along Lagos-Ibadan expressway, have emerged online.

There are different accounts of the incident which happened on Sunday.

In the video, several commuters were seen arguing with customs officials, with several other commuters from other vehicles watching.

A passenger was heard warning an official not to touch his phone, while some others were arguing with another official.

As the argument continued, a voice was heard saying, “Shoot him” and a gun went off immediately after.

The sound of the gunshot caused some people at the scene to flee with some others repeatedly shouting that the customs officials have killed someone.

An official, who lifted the man’s hand and realised that it fell to the ground, tried to get back into the official van of the customs but people at the scene prevented him and his colleagues from leaving the scene.

“Customs has killed someone because of N5,000. We are coming from abroad.”

The officials were alleged to have stopped the driver over some contraband goods in the bus.

The victim was said to have refused to comply with the customs officials who allegedly tried to extort N,5000 from him.

A Twitter user, @Psalmylicious, said: “This is why I try as much as possible not to get into any form of argument with these uniform men, many of them are mentally unbalanced”

“Damn. This so sad. Unhappy people in uniform everywhere, transferring their bitterness on innocent citizens. You really don’t deserve to be in the force if you can’t handle simple and non-life threatening situations without pulling the trigger. I wonder what He’ll say now,” Williams wrote.

I just watched a series of videos; beginning with the one where a man was shot dead by a customs officer because of 5k. I watched the video like 7 times. "Shoot him, kill him" was shouted by a colleague, then the devil's tool took the shot.

Meanwhile, customs has reacted to the incident, describing the narratives online as “conflicting”.

In a statement by Joseph Attah, its spokesman, the service said the deceased was not a passenger of the bus but “a friend” who helped  officials to fetch water.

Attah said Godwin was mistakenly shot during a brawl between the passengers and an armed customs official.

He added that one of its officials identified as Destiny Onebamho was injured in the process and was receiving treatment at a hospital.

He said the NCS was already investigating the incident and would get to the root of the issue.

“The attention of Nigeria Customs Service has been drawn to a disturbing video going viral with conflicting narratives,” the statement read.

“While it is painful and totally unnecessary to loose life in anti-smuggling operations, today at Shagamu interchange along Ijebu Ode, attempt to obstruct lawful performance of duty by passengers of a commercial bus (a white Toyota Hiace) suspected to be carrying bales of used clothing led to the death of a young man (Godwin) and serious injury of a Customs Officer, ASC1, Destiny Onebamho.

“Contrary to some narratives, the young man was not a passenger of the bus but a good citizen who always come to fetch water for Customs Patrol men anytime they return to the base.

“Preliminary finding indicate that it was during the skirmishes and struggle to disarm the Officer that the riffle discharged and hit the friend of the Customs (Godwin) who lost his life. The Service is already in touch with the bereaved family.

“Sadly, it should be noted that while attention shifted to the dead and the wounded, the passengers who filmed with inciting commentaries boarded their vehicle and left, leaving the wrong impression that it was one of them that was killed.

“While the wounded Officer is under intensive care at the hospital, the patrol team has been recalled to the office for further investigation.”

Editor’s note: This picture was used for illustration