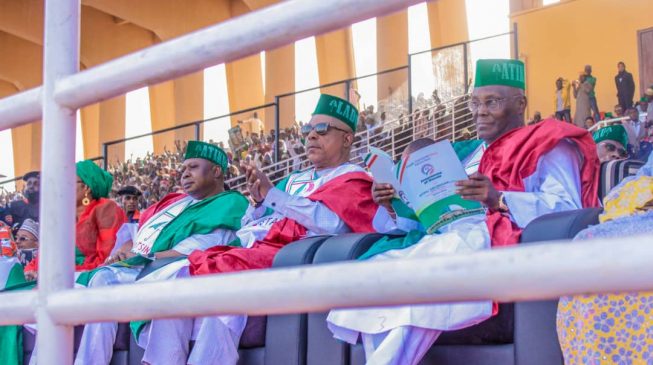 The Peoples Democratic Party (PDP) has accused the presidency and the All Progressives Congress (APC) of shutting down the Pld Parade Ground, Garki, Abuja, where Atiku Abubakar, its presidential candidate, was supposed to use for a rally on Saturday.

In a statement on Friday, the party said payment had been made and the venue had been secure until it was told by officials managing the facility that there was an order that the facility should not be used by Atiku.

The party accused President Muhammadu Buhari of doing everything to stop Atiku but vowed to fight on.

“The Peoples Democratic Party (PDP) decries the directive by the Buhari Presidency and the All Progressives Congress (APC)-led Federal Government to shut down the venue for its Presidential campaign mega rally in Abuja billed for Saturday, as an act of desperation,” the statement read.

“It may interest Nigerians to know that the PDP duly paid and secured permission to host our mega rally at the Old Parade Ground, in Garki Area of Abuja, only for the officials of the facility to inform our party this morning that they have been “ordered” to shut down the venue and frustrate our mega rally for no just cause.

“Such resort to self-help further exposes the irredeemable insensitivity of the Buhari Presidency and the APC.

“The overwhelming popularity of the peoples candidate, Atiku Abubakar, which points to an imminent crushing defeat that awaits President Muhammadu Buhari in the February 16, Presidential election has pushed the Buhari Presidency into a panic mode,” the party said in a statement signed by Kola Ologbondiyan, its spokesman.

The opposition party alleged that Buhari had become jittery over “spontaneous mammoth crowd of Nigerians at Atiku Abubakar’s rallies across the country, leading to the desperation to frustrate our rallies, resort to smear campaigns, vandalizing of our campaign materials and denial of venues, in APC controlled states, as was the case in Kano state recently”.