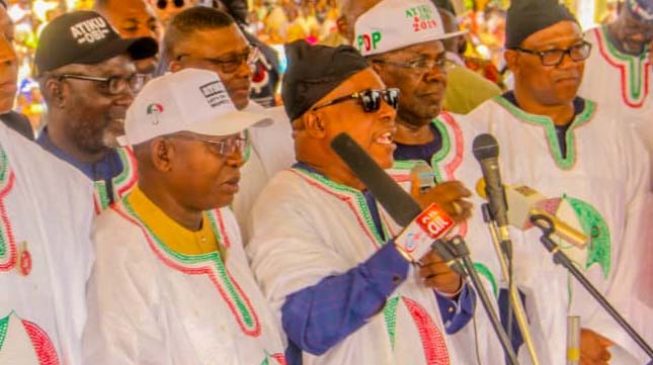 The Peoples Democratic Party ( PDP ) has called on the Independent National Electoral Commission (INEC) to disqualify president Muhammadu Buhari from the presidential election.

Uche Secundus, national chairman of the PDP, made the call during the presidential campaign of the party in Enugu state, on Friday.

He alleged that Buhari brought in foreigners from outside the country to influence the election in his favour when he campaigned in Kano state.

Two governors from the Niger Republic, Issa Moussa of Zinder and Zakiri Umar of Maradi, were part of those who had received Buhari in Kano.

Secondus uged the people of Enugu to vote for a man (Atiku) that will not sleep on duty, adding that “PDP is Enugu and Enugu is PDP.”

“Now on behalf of our great party, let me warn INEC, that what we witnessed yesterday at Buhari’s rally in Kano is the worse that even happened since the history of this country where mercenaries and government officers like governors and president of other countries came in their numbers from Niger Republic and Chad,” Secondus said.

“They came with monies and mecenaries to influence elections in Nigeria. All the papers have reported it.

“Now we ask, INEC, the unbiased umpire, to disqualify Buhari for bringing mercenaries to influence elections in Nigeria.

“INEC better be warned, you cannot rig this elections, we have won these elections, every where we have been, we have attracted more youth and women than APC.”

In his speech, Atiku urged Ndigbo not to miss the opportunity of producing the next vice president.

He called on them to vote for him, saying the PDP has never failed the people of the south-east.