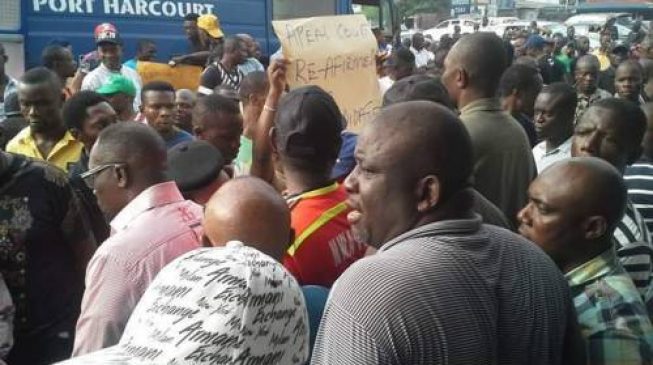 The police have restricted access to the head office of the Independent National Electoral Commission (INEC) in Rivers State.

A team of policemen stormed the commission’s office on Aba road, Port Harcourt, early on Thursday.

They prevented INEC officials and visitors from going in and out of the office.

The INEC officials were preparing for Saturday’s presidential and legislative elections when the officers restricted access to the office.

It is unclear why the police took the action but some members of the All Progressives Congress (APC) are currently at INEC office protesting a supreme court judgment which barred the party from fielding candidates in the elections.

The protesters are threatening that elections will not hold in the state if the APC is not listed on the ballot.

INEC failed to enlist candidates of the party for the governorship, national and state assembly elections based on a court order.

A faction of the party headed by Magnus Abe, a serving senator, had challenged the primaries and congresses conducted by the faction led by Rotimi Amaechi, minister of transportation.

The court had annulled the congresses and primaries and ordered the commission not to list the party’s candidate for the elections.

The Amaechi faction had challenged the order of the court up till the supreme court but lost.