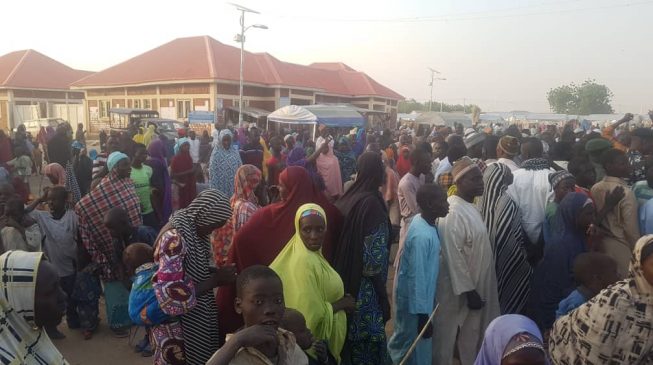 Policemen fired teargas at aggrieved internally displaced persons (IDPs) who took to the streets of Maiduguri, capital of Borno state, to protest hardship in the camp.

Led by women and little children, the protesters from Baga and Kukawa called for assistance from the public.

They grounded vehicular movements for hours, lamenting that they had not been fed in the last 40 days.

On Bulumkutu highway, the protesters destroyed the senatorial posters of Kashim Shettima, governor of the state, chanting “Bama So”, “Kumaida Mu Baga” (We don’t want, take us back to Baga).

Aisha Malum, one of the protesters, said since they came from Baga, they were kept in the camp without food, noting that only four cup of rice was given to her and her four kids in the last two months.

Malum noted that her husband ran to Cameroon when Boko Haram insurgents attacked Baga town some weeks ago.

“My children usually go out to beg for what we eat. And any day they do not go to beg, we cannot have any food to eat,” she said.

Umar Labaran, an angry youth, said more than 500 people were sleeping on the floor under horrific conditions.

Buka Mala, another protester, said some politician where demanding for their permanent voter cards (PVCs) before letting them into the camp

Mala said one of the former chairmen of Baga told them that those who do not possess PVCs are useless and do npt deserve to be in the camp.

“They told us to leave the camp if we dont have PVCs. We are tired of this wicked treatment vented on us,” he said.